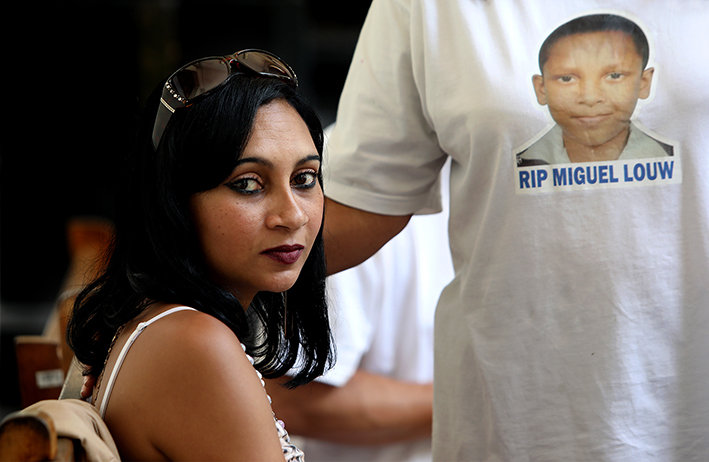 Raylene Louw took to the stand during the second week of the trial of the man accused of killing her son Miguel.
Image: Sandile Ndlovu

Raylene Louw made no eye contact with the man accused of killing her son Miguel when she testified that Mohammed Vahed Ebrahim had been just her friend and co-worker.

The Durban high court heard on Monday how Louw introduced Ebrahim to her family in May 2018 after they had become friends while working together at a local Durban butchery.

Ebrahim is on trial for the kidnapping and murder of nine-year-old Miguel.

Louw told the court that Ebrahim would occasionally spend the night at the house she shared with her mom and two children and that he would sleep in the spare bedroom.

“I introduced him to my mom and my two children and I told them that he was my co-worker and friend. He did sleep over and would sleep in the spare bedroom,” she said.

Louw said after she was fired from the butchery, Ebrahim had offered to help her take the matter to the Commission for Conciliation, Mediation and Arbitration (CCMA) to dispute her dismissal.

During his bail application in December 2018, Ebrahim alleged that he and Louw had been romantically involved.

That claim was disputed by the state, who argued that Ebrahim had killed Miguel to teach Louw a “lesson” because she had rejected his romantic advances.

The mother of #MiguelLouw has taken the stand to testify against Mohammed Vahed Ebrahim, the man accused of killing her son in 2018. She has told the court that he used to come visit her at her home because they were friends and coworkers @TimesLIVE

Louw wept as she told the court about her son. “My son was quiet and kept to himself. He was just an innocent nine-year-old boy,” she said.

Miguel’s decomposing body was discovered in a bushy area in Phoenix in September last year. The discovery was made less than 100m from Ebrahim’s family home.

Video footage from a motor spares shop near Miguel’s home showed him walking with Ebrahim on the day the boy went missing in July.

Ismail Rhyman, the man who provided police and the Louw family with footage from the day, testified that he was crossing the street when he saw Ebrahim and Miguel walking together near the KFC where he was last seen.

Defence advocate Jay Naidoo tore into Rhyman's testimony and accused him of embellishing the truth about who he saw on the day Miguel went missing. He questioned how Rhyman could remember seeing Miguel with Ebrahim over a year ago but could not remember what he was wearing last week.

“You watched the video and started putting the pieces together in your mind,” said Naidoo.

The matter was adjourned to Tuesday, when Louw will continue her testimony.