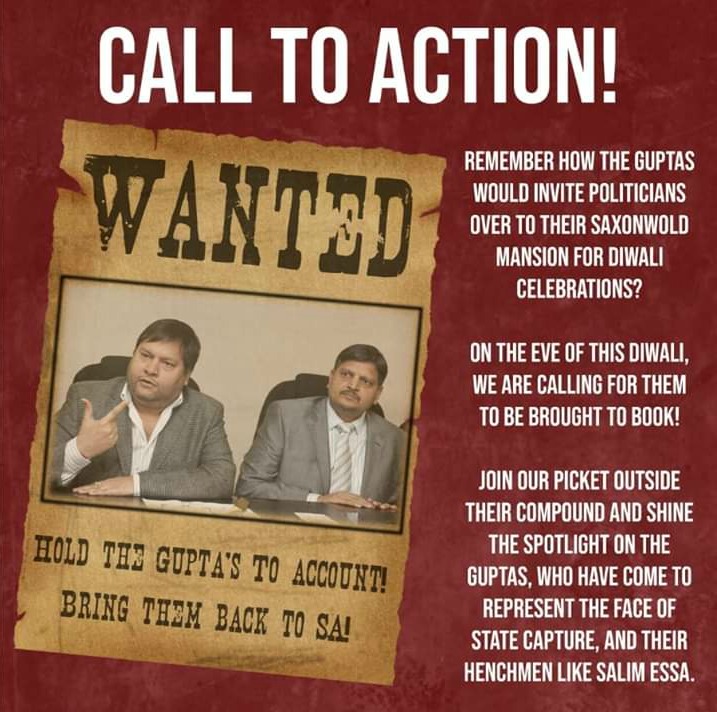 The Ahmed Kathrada Foundation and JAI flyer calling for a picket outside the Guptas' former Johannesburg mansion on Friday.
Image: Supplied

The Ahmed Kathrada Foundation has come under fire from Hindus for scheduling a picket outside the Guptas’ former Johannesburg compound on Friday, the eve of Diwali.

In a flyer circulating on social media, the organisers, including the foundation and another body, JAI, called on the public to join the picket outside the Saxonwold property.

Hindus around the world will observe the festival of lights at the weekend.

The flyer contains a picture of two Gupta brothers, with the heading, “Wanted”.

It reads: “Hold the Gupta’s [sic] to account! Bring them back to SA!”

The Guptas would invite politicians to their Saxonwold mansion for Diwali celebrations.

“On the eve of this Diwali we are calling for them to be brought to book! Join our picket outside their compound and shine the spotlight on the Guptas, who have come to represent the face of state capture...” the flyer goes on to say.

In a letter to the foundation, the World Hindu Foundation SA, said it regarded the protest as “an insult to the Hindu faith, the Hindu community at large and the subtle message and perception that clouds this event, more damaging not only to Hindus but to the Indian community at large.

“Whilst we acknowledge the negativity, the greed and levels of corruption and that the publicly shamed family had aggrieved upon the country, we find that reasons for the protest during the celebrations an insult to the Hindu faith...

The organisation called for the picket organisers to move the planned action to another day, “post Diwali”.

“I believe your foundation has favourable intentions. However, on this occasion I think it's misguided,” he said.

The foundation did not immediately respond to a request for comment.

The US Treasury recently announced sanctions against the Gupta family and associate Salim Essa, calling them a “significant corruption network” that dispersed bribes and misappropriated millions in state funds.

The Guptas are a subject of the state capture commission in SA.