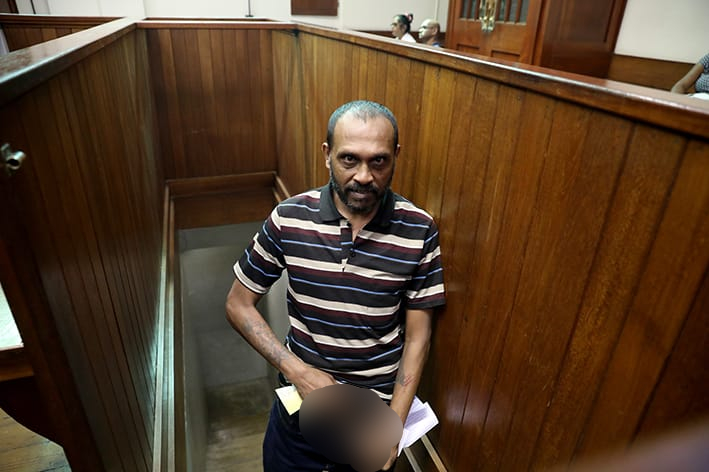 Minutes before Judge Philip Nkosi told a packed courtroom that Phoenix triple murderer Collin Pillay killed his married lover and her two daughters for reasons known only to him, the tow truck driver pulled down his pants and exposed himself to a TimesLIVE photographer.

Pillay who was walking up the stairs from the grill shortly before the judgment, told Sandile Ndlovu that he should take pictures of his “c***" instead of his face, before pulling down his pants.

The Durban high court judge on Thursday found Pillay, 47, guilty of the murders of Jane Govindsamy and her daughters, Denisha, 22, and Rackelle, 16.

Nkosi considered cellphone records, DNA evidence, CCTV footage, post-mortem results and the testimonies of several witnesses before making his judgment. Pillay  pleaded not guilty to all the charges.

The state alleged that Pillay killed Govindsamy because he believed that she was seeing someone else.

He was in a relationship with the married mother of two before it soured in September last year. On the morning of September 21 last year‚ Sagren Govindsamy entered his flat through a window as no-one answered the door the night before, when he returned from working a 2-10pm shift.

He told police that he did not have house keys, so he had knocked on the door. When his wife and two daughters did not answer‚ he left to spend the night at his mother's house.

On Thursday Nkosi said he was satisfied that the state had proved its case beyond a reasonable doubt.

“What put paid to the accused's defence is forensic DNA evidence which puts him at the deceased's home...”

Nkosi also found that Pillay could not provide a reasonable explanation for how the blood of the three were found on his jeans.

“I could not find any reason to doubt and distrust the credibility of the state's witnesses.”

Pillay was put on the stand to testify in mitigation of sentence. He told the court he was a widower and a father of four, who depended on him financially.

Sentencing is expected to be delivered later on Thursday.

IN QUOTES | All women are prey for deeply violent men who feel entitled: EFF

Reward offered for triple murderer who 'walked out' of Cape court

Convicted triple murderer Phelo Mtala didn't have to break out of his maximum security prison cell to escape custody. He simply put his finger prints ...
News
2 years ago
Next Article