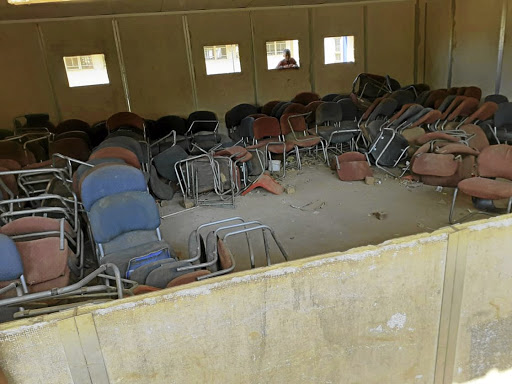 A class at Kutumela Molefe Primary School lies in shambles after being vandalised by robbers.
Image: THOMO NKGADIMA

Kutumela Molefe Primary School in Donkershook, east of Pretoria, has been hit 10 times this year by burglars who have now resorted to ripping it apart.

The thieves initially went for the school's prized possessions such as gas cylinders and computers.

When there were no computers left, the criminals resorted to stealing food meant for the pupils' feeding scheme.

After the food was moved to a rented storage facility for safekeeping, the thieves started stripping the school down, taking anything they could find, including window frames.

When Sowetan visited the school this week:

The school's administration office had a gaping hole on its prefab structure after a window frame was stolen;

Burglar-proof bars on the windows had been pulled out and the main door was missing as well; and

The steel main gate had been bent out of shape, seemingly to allow access.

The beginning of matric exams was marred by one violent incident after security guards at the tribal offices housing the department of education were ...
News
2 years ago

Gauteng education department spokesperson Steve Mabona said the department was aware of the conditions at the school.

"It must be noted that this school is on private-owned farmland. The department commits to build new schools with the capacity to accommodate the learner population.

"For this purpose the department purchased portions 1 and 2 of the Farm Pienaarspoort 338 in June 2018," Mabona said.

He said the department bought the land with the intention of building two schools; a secondary school and "an improved replacement primary school".

"Unfortunately, these two land portions have since been illegally occupied" by land invaders, Mabona said.

"The department can only initiate the process of planning the said schools in the area once the illegal land occupiers have been evicted from the area."

Mabona said they had referred the matter to the department of infrastructure development as the custodian of state immovable properties and the state attorney for possible eviction.

Police are investigating the theft of more than R3m worth of school equipment from Esithebeni Primary School in Zola, Soweto, on Friday.
News
2 years ago

Gloria Maepa, 49, a parent, said they were concerned that toilets in the school were not in good condition and could cause diseases.

In April, education MEC Panyaza Lesufi together with police minister Bheki Cele visited the school and promised to address the problems.

Maepa said it was unfair that primary school pupils had to attend lessons in a class with broken windows.

"I am worried about the future of our kids and I blame parents and police in the area for their inability to deal with criminality," said Maepa yesterday.

The department appealed to members of the community who are illegally occupying the land to vacate it with immediate effect in order to fast track the building of a new school.

Keep our kids safe in all schools

Yet another child was killed at school yesterday.
Opinion
2 years ago
Next Article