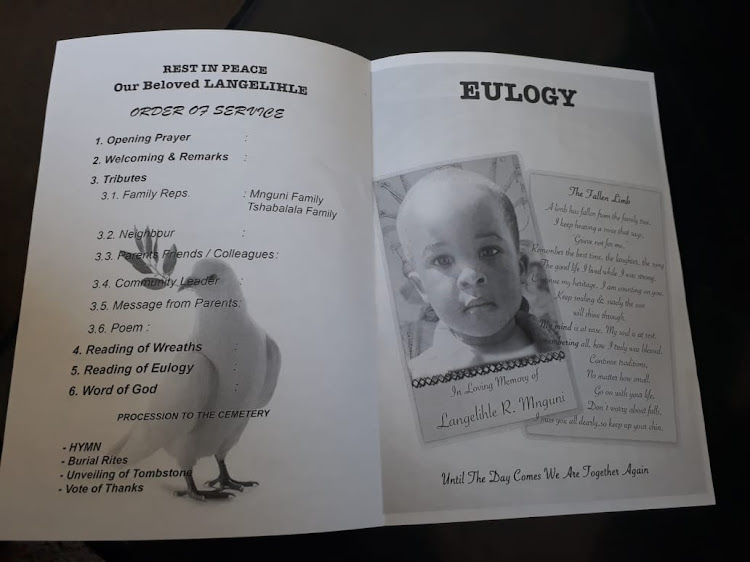 Mourners told the parents of a toddler, whose nanny is implicated in his murder, not to blame themselves for the tragedy.
Image: Supplied

“Never blame yourself. Don’t think you hired someone to kill your child. Your purpose was to hire someone to look after your child, not kill him.”

These were the words of solace offered by a neighbour to a grieving mother at the funeral on Thursday of her toddler who was found suffocated to death at Daveyton in Ekurhuleni.

The child's caregiver has been implicated in the murder of little Langelihle Mnguni.

Speaking at Langelihle’s funeral service, Moeketsi Motingwe told Lerato Mnguni not to blame herself for trusting her son’s killer.

“Never blame yourself. Don’t think you hired someone to kill your child,” Motingwe said.

Langelihle died last Friday. He had been gagged and suffocated to death. His nanny told the family the child was snatched during a break-in and claimed she had been poisoned.

His body was discovered hours later inside a storeroom at the family home.

“His soul will always be with us,” Motingwe told hundreds of mourners at the funeral, acknowledging that it would be tough for the 28-year-old mother to cope.

“All I can say is stay strong. It will not be easy but through God’s grace and mercy, we will make it through this.

“My wish is that you and Sihle [Tshabalala, Lihle’s father] will remain strong. There will be a time when you will want to blame yourself, when you will be depressed but God is still there,” he added.

Silungile Ndlovu, a friend of the couple, urged them to find solace in God.

“Lerato and Sihle, grieve and cry but don’t let the tears overshadow the memories you made with your son,” she told the couple, who sat in the front of a marquee, their hands locked together as Lerato sobbed. Her cheeks were bright red from crying.

“The family chain is broken and nothing makes sense but as God calls us one by one, we will link again,” added Silungile.

Speaker after speaker took to the podium behind Lihle’s white coffin.

Pictures of Lihle were displayed on a table next to the coffin as two balloons, inscribed with “we will miss you”, floated above the table.

The little coffin was surrounded by wreaths and bouquets of flowers from mourners.

"We will miss you." These were the words written on two floating balloons tied to a table placed near the coffin of Daveyton toddler Langelihle ...
News
2 years ago

Earlier this week, Lerato said that she was battling to piece together what had gone wrong as their nanny, who had cared for their son since he was two months old, was fond of the child.

Moss Mnguni, the distraught mother's uncle, told mourners that perhaps signs that something was amiss had been overlooked.

He recalled how several days ago, his nephew cried out as they drove around the neighbourhood and refused to get out of the car to return to his nanny indoors.

Moss said perhaps the child could not communicate that something was wrong.

He told mourners that there was a lot that they seemingly did not know about the nanny. “She lied to us and said that she had two children. This was not the case,” he said.

He said he was grateful at the restraint shown by the family: “We could have handled it differently and all landed in jail.”

Phelisa Nkunjana, transport MMC for Ekurhuleni, was among the mourners. She said while her department worked and prayed for safety on the roads, “Lihle was injured at home”.

“When Lerato gave [the nanny] a job, she thought she was bringing in a helper, a mother herself, who would help her. As the Ekurhuleni community, we are disturbed by what has happened,” she said.

Nkunjana said the ANC would support the family as the nanny makes a second court appearance next Monday.

“We hope that the law will be tough because no-one should ever lose their child in this way,” she added.