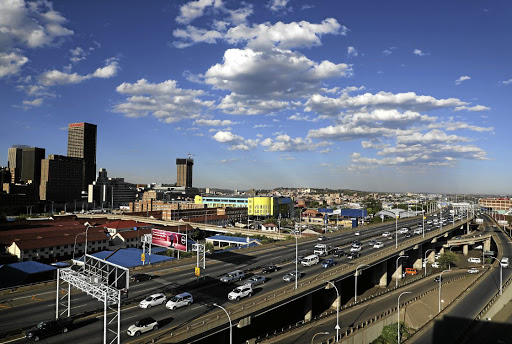 Traffic over the M2 bridge at Crown Interchange will return to normal from November 4. / SANDILE NDLOVU

While the City of Johannesburg is preparing to reopen the M2 bridge which has been closed for eight months, 50 more bridges in the city are in need of urgent repairs.

"Across the city we have approximately 50 bridges that require urgent repairs. The implementation of all these repairs is budget dependent.

"We are currently busy with the repairs of Joe Nhlanhla bridge in Alexandra, South Road bridge and Spring Road bridge in the west of Johannesburg," Genu said.

He said the city was on track to reopen the M2 bridge between the Crown Interchange and Maritzburg Street on the highway on November 4 after it was rehabilitated.

Emergency repairs to sections of the motorway started after an assessment revealed that the structural integrity of the concrete elements was severely reduced. The M2 is one of the city's main motorways and links the N3 and M1 with the city and the western parts of Johannesburg.

The M2 bridge rehabilitation will be finished by the end of October.
News
2 years ago

The JRA says it will cost more than the budgeted R160m to rehabilitate the M2 motorway between the Crown Interchange and Maritzburg Street - but is ...
News
2 years ago

JRA conducted structural repairs which included the bridge's columns, decks, joints and resurfacing of its surface. But this came at a high cost to motorists who had to endure congested traffic.

Since February 28, about 12,000 motorists who had been using the motorway during the morning and evening peak-hour periods have had to find a new way to get to and from work in the city.

Outgoing Joburg mayor Herman Mashaba admitted this week that the closure of the bridge had caused major inconvenience to businesses and residents, but said the city had to shut it down to protect lives.

Genu said while there was relief to motorists about the reopening of the bridge, work was not complete.

"The project is not complete yet, so the final cost has not been determined but to date we can confirm that we will spend more than R160m. We have eight more bridge structures along the M2 that require repair and rehabilitation works but at small scale when compared to the current works. We don't envisage that this repair will require full closure of the M2 again."