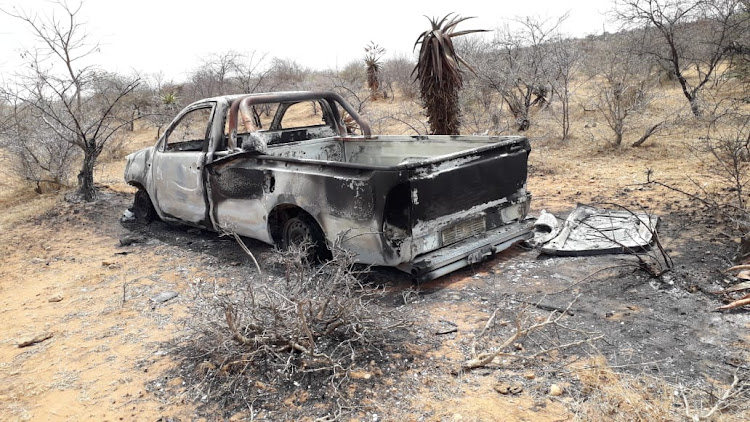 A car which belonged to one of the men was torched not far from the scene.
Image: Saps

Limpopo police have condemned the brutal murder of two men from a village in Ga-Molepo in the province this week.

Police spokesperson Brigadier Motlafela Mojapelo said the two men, who were accused of stock theft in the area, were allegedly kidnapped by community members on Monday.

Mojapelo said they were taken to a community hall where they were severely assaulted.

Man had fled after burying his mom.
News
2 years ago

He said the two men were then set alight at a local high school.

A car which belonged to one of the men was found torched fairly close to the murder scene.

“The people who committed these vigilante acts will be hunted down and brought to book,” provincial police commissioner Lieutenant General Nneke Ledwaba said.

Cases of murder and kidnapping were opened. No arrests were made.

Dad steps in after woman is set alight

The family of a 25-year-old woman is pleading for help to save her life after she was assaulted and set alight, allegedly by her comedian boyfriend.
News
2 years ago

The family of a 25- year old woman who was assaulted and set alight allegedly by her well-known comedian boyfriend wants the law to take its course ...
News
2 years ago

A 39-year-old man was attacked and set alight by a mob at the Muhovhoya village in Limpopo on Monday.
News
2 years ago
Next Article