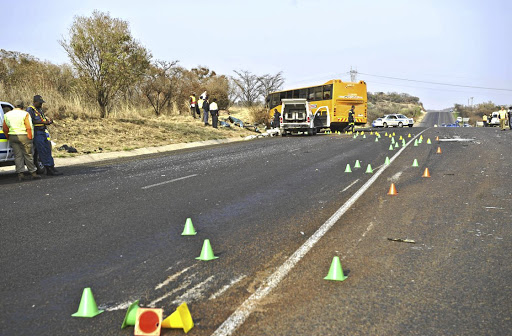 An accident scene on the R573, also known as Moloto Road. / Gallo Images

The most dangerous parts of the notorious Moloto Road have not been upgraded because the Gauteng government has not handed it over to the national roads agency.

The long-overdue upgrades on the Gauteng portion of the road cannot commence until the province hands it over for construction work to begin.

In February, the SA National Roads Agency Limited (Sanral) was allocated R3,3bn by Treasury to upgrade the road, including expanding some parts of it from single lanes to double lanes.

Sanral spokesperson Vusi Mona said in Mpumalanga, where they're working on a 48,8km stretch of the R573, they had completed four priority intersections.

Several intersections on the road including in Vlaklaagte and Mathyzynsloop have already been transformed into traffic circles in an effort to manage traffic flows in a road which sees thousands of people mainly from the former KwaNdebele homeland commuting to and from Pretoria in Putco buses daily.

For all intents and purposes, e-tolls are dead.
News
2 years ago

"In Limpopo, this section of the R573 is 43,7km long and was unbundled to form four work packages. The first work package which is 19km in length is still under construction and 56% of work has been completed to-date," Mona said.

Gauteng roads and transport MEC Jacob Mamabolo told Sowetan yesterday he would only announce a decision on the matter before November 15.

As a result, Sanral only did work on other parts of the road, between Moloto and Marble Hall, which fall under Mpumalanga and Limpopo.

"We are tying up the final ends and within the four weeks we will be making a comprehensive announcement but there are processes which have be completed," Mamabolo said.

He said he also needed to familiarise himself with issues which his predecessors had dealt with on the matter.

"We are finalising the processes on the determination and we will then make a decision," Mamabolo said.

In the current budget, no allocation from the Gauteng government had been set aside for the upgrading of the Moloto Road.

DA member of the Gauteng legislature and its spokesperson on roads and transport, Janho Engelbrecht, said they were putting pressure on the provincial to hand over the road to Sanral.

"The Gauteng department of roads and transport does not have the capacity nor the budget to ensure that this road is upgraded," Engelbrecht said.