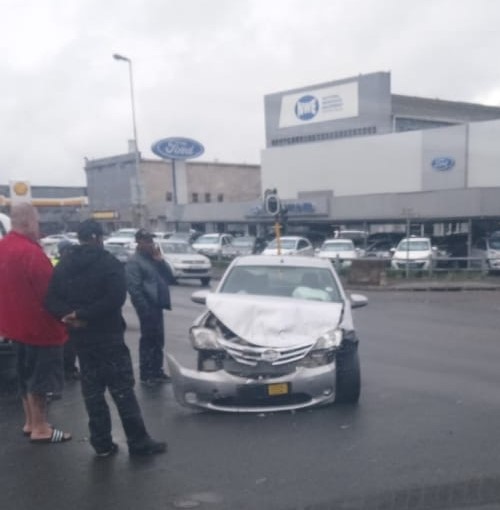 The grey Toyota Etios the suspects were travelling in before crashing on Durban's M7 highway.
Image: Supplied

Two men sustained multiple gunshot wounds after a high-speed chase and shootout with police on Durban's M7 highway on Tuesday.

According to a source, the men allegedly committed a business robbery at a butchery in Clairwood, south of Durban.

Police received information about the getaway vehicle used in the robbery and sprung into action, before a high-speed chase ensued along the highway.

The men, who had been driving a grey Toyota Etios, crashed their vehicle and fled on foot.

Rescue Care's Garrith Jamieson said the suspects were in a serious but stable condition.

"It's believed that SAPS were in pursuit of criminals and two of the criminals have been shot. They're currently being treated by advanced life-support paramedics from Rescue Care and they will then be transported to hospital under police guard."

Jamieson said the scene was still active and advised motorists to avoid the area.

Police swoop on suspects as they flee from Durban supermarket robbery

Swift police action led to the arrests of five suspects, aged between 17 and 24, shortly after a business robbery in Phoenix, north of Durban, on ...
News
2 years ago
Next Article