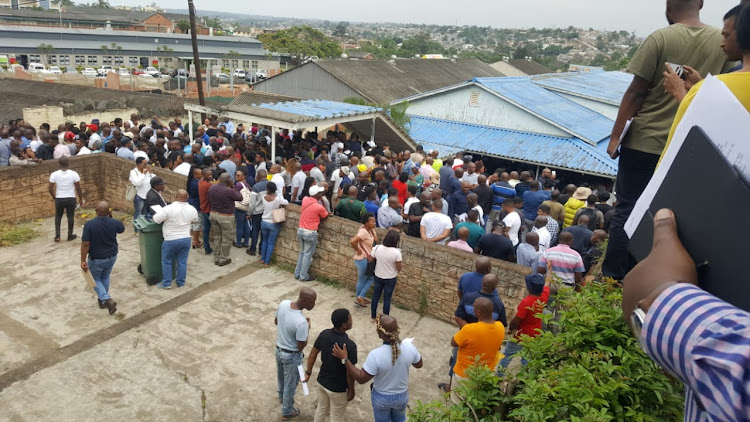 A large crowd was waiting to attend a tender briefing at a public works building in Durban on Monday when a floor collapsed.
Image: Supplied

The public works department in Durban has ordered an investigation into what caused the floor of one of its buildings to cave in on Monday.

The incident happened before a human settlements department tender briefing for a large group of contractors.

Department spokesperson Kiru Naidoo told our sister publication TimesLIVE that a small section of the wooden floor gave way in an old lecture hall, in a prefab building within the public works complex in Mayville.

He said no injuries were reported and the building was used “infrequently”.

“The head of department has ordered that the building be shut down and that an investigation be conducted by an internal team comprising engineers and architects,” Naidoo added.

A Durban man, who asked not to be identified, said he received a frantic call from his wife, who was attending the briefing.

“My wife called me to say the briefing hadn't started and that there were about several hundred people who were just about to enter the room when the floor collapsed.

“I am not sure about the extent of her injuries, but I am on my way there and I will take her to the hospital to make sure she is OK.”

The man said his wife told him that some contractors were furious after the collapse and were protesting outside the building.

Naidoo said he had not received any information regarding a protest.

Cable theft, failure of ageing infrastructure and a restraint on human resources are some of the problems faced by City Power Johannesburg during ...
News
2 years ago

A five-year-old boy was crushed to death when a boundary wall fell on him in Veeplaas, Port Elizabeth, Eastern Cape police said on Friday.
News
2 years ago
Next Article