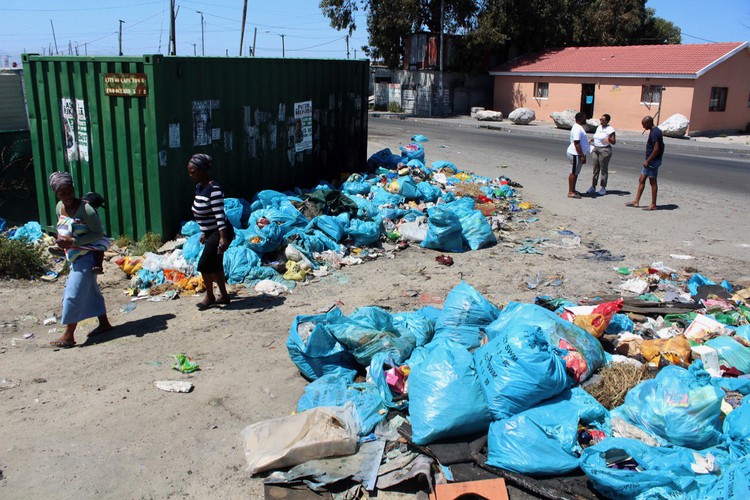 Trash has been piling up in Philippi, Cape Town, as the city and community dispute who should do the work.
Image: Masixole Feni / GroundUp

For over a month, rubbish overflowed from green garbage skips all along Sheffield Road, which runs past Rholihlala, Marikana 1 and Marikana 2 informal settlements in Philippi, Cape Town.

According to resident Siwaphiwe Dolophu, it hadn’t been cleaned up from the end of August until the councillor arranged a truck to tidy up the road on October 17.

Inside the informal settlement, however, the situation remains dire.

“We do not know what to do anymore. Children are playing in this dirt,” said Dolophu.

He said the problem is an ongoing dispute with the City of Cape Town.

When she wants to relieve herself, wheelchair user Nonkululeko Dziweni has to rely on two people to take her to Mdantsane City Mall, one kilometre ...
News
2 years ago

He said residents had provided the city with a list of names of people who lived in the area to do the job, but it was rejected.

On October 3, Marikana residents marched to the Fezeka Municipal Building in Gugulethu to protest the lack of refuse collection. In a memorandum, the residents, supported by the Social Justice Coalition (SJC), demanded the city employ residents who were on the community list and that work resume.

Asked how the city’s database worked and why the list of names provided by the residents was rejected, Mayco member for urban management, Grant Twigg, replied: “Community leaders are dissatisfied with the recruitment process, therefore they have stopped the service. The job-seekers database is the only method that will be used to employ workers by the contractor.”

Twigg added: “Leaders in some informal settlements are preventing the City of Cape Town from cleaning their communities, which now poses serious health risks. Some leaders are unhappy with and are attempting to interfere in the employment processes of the city’s Extended Public Works Programme. The problem has been exacerbated by the internal tension and conflict between the community and their elected leaders.”

Twigg said the city had been engaging with the communities and their nominated leaders since the beginning of August, but was unable to reach an agreement.

Fana* and Thabo* are coal hunters. Every day they climb onto the goods trains transporting coal along the Brakpan-Springs route to fill up their ...
News
2 years ago

“The city has attempted to reinstate services, but we have continually been prevented from doing so. We are, therefore, extremely concerned about the risk this now poses to residents,” he said.

Dolophu took GroundUp around the informal settlement. Some pathways one could hardly walk through because they were blocked by blue garbage bags piled on top of each other, stinking and rotting in the sun, covered in flies. A woman rummaged through the bags looking for scrap.

Behind the busy Jumbo Cash and Carry store at Marikana 2, an open field used for community meetings has turned into a rubbish tip.

Nosizolele Dyasopu, who has lived next to the field since 2014, said, “My neighbours and I resorted to cleaning up the garbage ourselves, but as you can see, it has become too much. I have gloves inside my house that I use when I clean. We pick up what we can and then the rest we burn. It gets tough because residents dump food here as well which attracts mice and rats. Sometimes you will also find people emptying their toilets here on this field.”