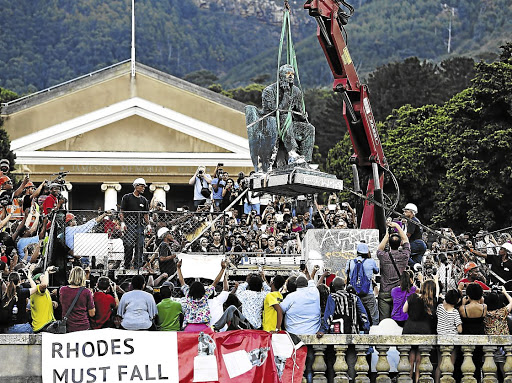 Fallists celebrate as the Rhodes statue is removed from the University of Cape Town in April 2015.
Image: Esa Alexander

Rhodes might have fallen at the University of Cape Town, but his name will live on in scholarships that allow graduates from around the world to study at Oxford University in the UK.

The head of the Rhodes scholarship programme, Elizabeth Kiss, said changing the name would amount to “running away” from the complicated legacy of colonialism.

The Rhodes Must Fall campaign at UCT, which began when faeces was thrown at the 19th century British colonialist’s statue on upper campus, achieved its first success a month later when the monument was removed and placed in storage, where it remains.

In the longer term, the campaign took on institutional racism, UCT’s racial transformation and decolonisation, and heralded the Fees Must Fall movement which forced the government into major concessions on access to tertiary education.

The campaign also rippled around the world, but Kiss told The Times in London on Saturday she would resist pressure to remove the name of Cecil Rhodes from the 117-year-old scholarship programme.

Supporters of Rhodes Must Fall say a man who was racist, seized land from black Africans and prepared the ground for apartheid should not be celebrated. They want his statue at Oriel College in Oxford to suffer the same fate as the 85-year-old UCT statue. 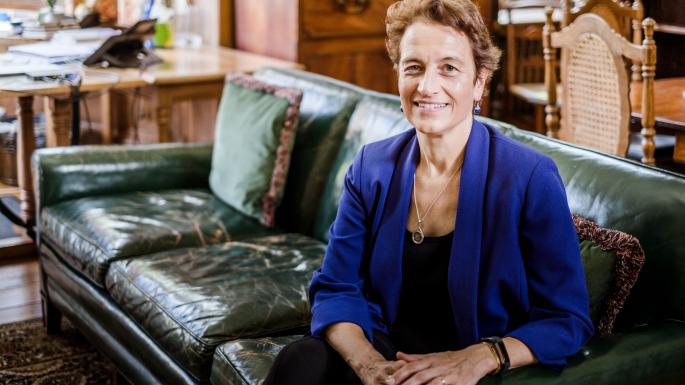 Elizabeth Kiss says the name of Rhodes scholarships will not be changed.
Image: Wikipedia

But Kiss, a US philosopher and former Rhodes scholar said: “If we change the name, what do we gain? The legacy is still there. You are just running away from it.

“All of us, not just Rhodes scholars, are products and beneficiaries of very morally complex legacies. However, in bearing the name, Rhodes scholars are challenged continually to confront that and engage with it.”

The Rhodes Trust has been modernising the programme, The Times reported. In this year’s cohort of scholars, women outnumber men. Americans are the largest single group, but there are beneficiaries from all over Africa, as well as China, the Gulf states and the Middle East.

Rhodes’s memory also survives in the annual scholarships awarded in South Africa by the Mandela Rhodes Foundation, Nelson Mandela’s official legacy organisation for leadership development which was set up in 2003.

Former Democratic Alliance parliamentary leader Lindiwe Mazibuko says her support for the party is not meant to last forever.
News
3 years ago

Pendo sets the stage alight with his violin

While boys his age think about playing video games, Pendo Masote is already making his name in the classical music scene. The 13-year-old violinist ...
Entertainment
4 years ago
Next Article