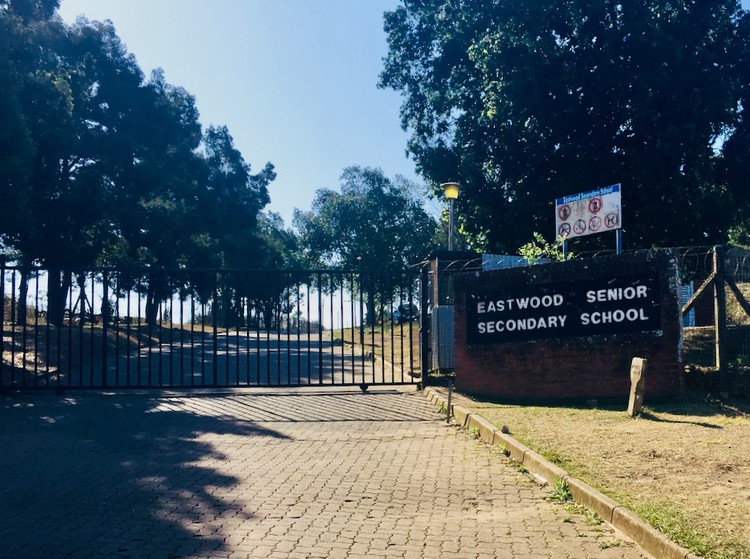 Parents have called for an end to a school-leaving ritual which turned violent this week, leaving a teen dead.
Image: Nompendulo Ngubane for GroundUp

Parents and the community of Eastwood in Pietermaritzburg are urging the KwaZulu-Natal education department to deploy extra security at Eastwood Secondary School.

The call comes after grade 11 pupil Hershel Fynn was stabbed to death outside the school gate on Tuesday.

According to pupils, the 18-year-old was killed after he confronted another pupil over the stabbing of a girl on Monday with a pair of scissors.

The school was shut down on Wednesday after the incident. Later that day, education MEC Kwazi Mshengu met people from the community and promised parents that security would be tightened at the school.

Pupils told GroundUp that the attack was sparked by a "bombing ritual".

There is a growing concern over increased incidents of violence in schools, which in most cases claim the lives of pupils across the country.
News
2 years ago

The ritual happens before matric pupils write exams. Pupils fill condoms with water, paint, hair remover and even human waste to pelt teachers and other pupils.

One pupil, Kaylum Willard, a friend of the deceased, said, "The bombing game has been in school for long … from years ago. This year on Monday the bombing was so bad that one boy stabbed a girl with a pair of scissors, twice to the stomach."

He said she was still in hospital.

He described Fynn as "a good person and he was never part of the game [bombing]".

"I will always remember him," he said.

Another girl said, "Fights have become normal. The school is not a safe place anymore. We are exposed to bullying."

The family of 14-year-old pupil Tshepo Mphehlo who died after he was stabbed at school have forgiven his 15-year-old killer.
News
2 years ago

An angry parent, Mbali Mchunu, said: "What is the use of employing security guards who don’t intervene when learners are attacked or fighting? Why are they there if they fail to do their job?"

Another parent, Judy Maharaj, said, "Every year around this time the community runs around like headless chickens to help the school due to bombing. I’m urging the MEC and the department to put their heads together in a way for us to combat this game."

"Studies have shown that where communities take ownership of their schools, the rate of violence is low."
Opinion
2 years ago

A grade 6 pupil from Bloemfontein, who was stabbed to death at the weekend, is expected to be buried on Friday
News
2 years ago

Schools have become dens of violence. This time it was Tshepo Mphehlo's turn to fall victim to the senseless violence this country has witnessed in a ...
Opinion
2 years ago
Next Article