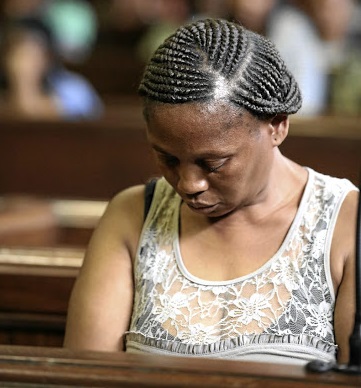 Nonhlanhla Matiwane is accused of plotting the murder of her husband, who was shot dead in March this year.
Image: ANTONIO MUCHAVE

A woman who is accused of ordering a hit on her husband has been remanded in police custody until her bail hearing next Thursday.

They are accused of killing Matiwane's husband Sibusiso Mthombothi in March in KwaThema, Springs, Ekurhuleni.

According to police, Matiwane - who was arrested on Monday - has apparently confessed to ordering the murder of Mthombothi, who was shot more than seven times in an open veld near Ntokozweni Primary School.

Police said Matiwane had promised to pay one hitman R80,000 once Mthombothi's life insurance policy was paid out.

A 41-year-old woman has been charged with murder after she allegedly confessed to hiring a hitman to kill her husband.
News
2 years ago

Matiwane's four co-accused have been in custody since March. They were denied bail following their arrest.

"A witness, Detective Rose Moramaga, who is the officer investigating the case, will take the stand and give the court evidence against accused number five (Matiwane) in a case where the state will be opposing bail," said Moloto.

Matiwane's neighbour Lungile Mpungwana said the community was shocked by the news of her arrest.

Mpungwana told Sowetan Matiwane was an active and bubbly person.

Mpungwana also described Mthombothi as a humble man who loved his wife and who always bragged about his family and children - even the other two older ones who were not biologically his.

"His family was his priority and he knew his role as a husband and father. We still don't understand how this woman would do such a cruel thing," she said.

A woman was arrested for allegedly murdering her husband who bled profusely after his arm was lacerated by a broken mayonnaise bottle during an ...
News
2 years ago

Police are investigating three cases of murder and an inquest after a 40-year-old woman allegedly shot and killed her children and apparently turned ...
News
2 years ago

The Rwandan government has pledged to investigate the case of a woman who allegedly killed her husband after he inherited the widow of his brother ...
News
7 years ago
Next Article