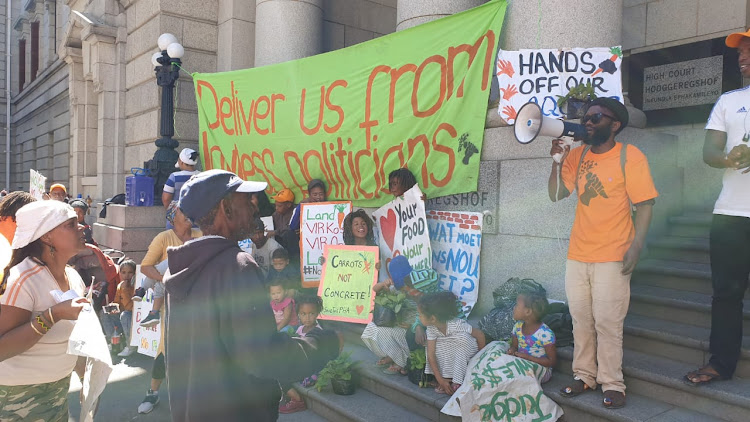 Supporters of the Philippi Horticultural Area's bid to block the City of Cape Town's plans to develop 1,000ha of agricultural land protest outside the Cape Town high court on Wednesday.
Image: Dan Meyer

The Philippi Horticultural Area (PHA) took on the City of Cape Town on Wednesday on the second day of a high court battle to prevent development of more than 1,000ha of agricultural land responsible for producing 200,000 tons of vegetable products each year.

The area is set to be converted into the Oakland City mixed-use development by land developer Wentzel Oaker.

The PHA has been campaigning against the proposal for more than a decade, after the city outlined its intentions to rezone the area in 2009. The PHA maintains that the land is the primary recharge zone for the Cape Flats aquifer and indirectly provides some 30,000 jobs.

Outside the court, a group of protesters gathered wearing orange to represent the 80% of the Western Cape's carrots that are grown in the area. Leader Nazeer Sonday, who brought the case to the city, said that should they lose the case, the effects would be felt far and wide.

"The move scares me, because it will mean that a great deal of the land used for farming will become unusable," he said. "It is a major factor in the food supply for the area."

Signs and placards outside the court asked, "Do you know where your food comes from?" Protesters said the effect the move could have on the environment was down to "lawless politicians".

Representing the city, advocate Ron Paschke attempted to debunk the idea that the proposed development would pollute the country's largest aquifer and stem efforts to help emerging black farmers.

"I would like to address inaccurate complaints that the aquifer is over-stressed and polluted," he said, referring to an independent report carried out by the city. "The proposed development will not cause any pollution that cannot be mitigated by the city policy," he charged.

He said that the city had the best interest of the environment at heart, and would block any plans that threatened the ecology of the area or threatened to pollute the water resource.

"The city has the power to dismiss any planning applications that threaten the aquifer," he said.

A 30-year-old Western Cape man who stoned police officers and joined a crowd in overturning a police vehicle before setting it alight has been ...
News
2 years ago

Mpumalanga protesters locked out of mine offices

A hoard of Protestors from Mpumalanaga have arrived at Melrose Arch, north of Johannesburg where offices of Mining company South 32 are situated.
News
2 years ago

He continued to diminish the PHA's complaint by suggesting that the land in question has not been used for farming for decades, and said that independent reports revealed that the land was "of poor quality for farming", a concession apparently reiterated by the PHA.

PHA advocates charged that the city had not taken socio-economic factors into account when considering the move.

"It is not purely about farming," they said. "The entire argument [from the City] is based on this erroneous notion that the land can only be used for farming."

They charged that the land could also be used to facilitate housing schemes for people who "desperately need it, from lower to middle class backgrounds".

Judge Kate Savage will hear more testimony from the city on Thursday.