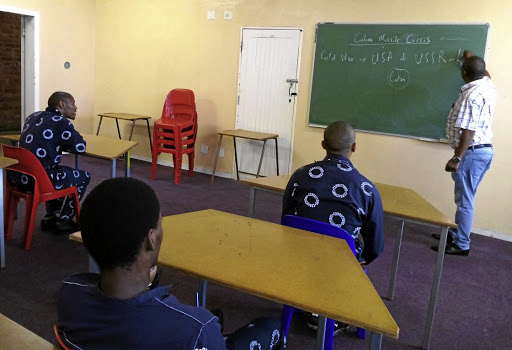 Learners at Usethubeni School, a prison learning centre for young offenders, do revision with their teacher./CHRIS MAKHAYE

Mnelisi Xaba's life is a far cry from the one he led as a youngster.

Xaba, 28, is a university lecturer in economics and marketing.

In 2007, Xaba - from KwaMashu, north of Durban - was arrested for house-breaking and sentenced to more than four years behind bars.

He served his time at the Durban Westville Youth Correctional Centre.

"I was a victim of peer pressure. I joined school friends when they decided to rob a house in Scottburgh," he said.

"I was in grade 11 when I was arrested and when I entered the prison system I
focused all my energy on studying."

Xaba enrolled at the Usethubeni School - a prison learning centre for young
offenders that allows them to continue with their studies while they are behind bars.

"Many people are brought to a life of crime by peer pressure. It can be negative or it can be positive.

"Today, I am under pressure from my academically-inclined friends because I'm pushing myself and they are helping so that I can finish my PhD in record time," said
Xaba, adding that some of his fellow ex-offenders went back to a life of crime.

SA's prisons could run out of beds as crime rate surges

The growing crime rate and rise in life sentences meted out to offenders may mean that there won't be enough beds for criminals in SA’s prisons.
News
2 years ago

The school's principal Nelly Mkhize said she enrolled up to 400 pupils a year, adding that all offenders under 16 were obliged to study until matric.

In her office, Mkhize displays an array of trophies that the school has won since
it was made a full-time educational facility in the early 2000s.

The prison school has achieved a 100% matric pass rate in the past three years.

Mkhize said teachers at the school go through a vigorous induction programme to
prepare them to deal with young offenders.

She said the school has not experienced gang violence or any sign of dissent.

"There are gangs here like in any prison facility. But those who are gang members leave their gang activities in their cells and here in school they are learners," she said.

"In this school we have produced chartered accountants, lawyers, educators and academics," she said.

An ex-convict and pupil at the school who did not want
to be named went on to pass his BCom accounting and now runs a successful estate agency.

Sabelo Gumede, 25, from Pietermaritzburg, also made good use of the opportunity he got when he was sentenced to three years for robbery.

He is doing his final year for a bachelor's degree in education at the Durban University of Technology.

Crime: why 'throwing away the key' doesn’t help

“Lock them up and throw away the key”: the standard response to the endless tickertape of crime that disrupts, damages and too often destroys the ...
Good Life
2 years ago

A look inside Sun City prison during a raid aimed at finding illicit substances.
News
3 years ago

If our politicians can reduce their VIP protection costs, annual statistics can take a whole new meaning for citizens
Opinion
3 years ago
Next Article