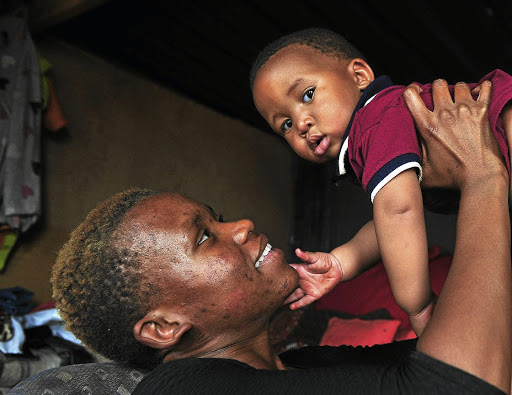 Nancy Mmusi embraces her son Lihle who was stolen from home. The mother says she is relieved the baby was returned unharmed./Veli Nhlapo

A mother of a nine-month-old baby who was stolen from their home a week ago says she feared for the worst.

Yesterday, Nancy Mmusi of Protea South in Soweto, who was reunited with her son five days after the baby was stolen, said she had given up hope of seeing her child alive.

"I thought he would return dead, or they would torture him and use his body parts for muthi because people do that a lot," 29-year-old Mmusi said.

"I didn't know if he was eating, if he was warm and if he was being taken care of. I am happy to have him back. A lot of children go missing and come back dead or they are not found at all. I am lucky that Lihle was found unharmed."

The baby boy was stolen from his mother's home by a woman who regularly visited her boyfriend in the area. The woman is said to have taken the child from his mother, promising to return him after a few hours. But she never did until she went to Brits police station to drop off the baby.

The 32-year-old woman appeared in the Protea magistrate's court on Friday and was charged with kidnapping.

Her matter was postponed to October 18 for further investigation.

For four days, the Mmusi family anticipated bad news about their youngest member, however, on the fifth day little Lihle was found unharmed in Brits - 110km away from home.

Mmusi, a mother of four, was full of smiles yesterday as she bonded with her son. She said the abductor brought the baby to Brits police station where she also handed herself in.

The suspect had fled with Lihle to Brits where she works as a domestic worker.

Mmusi confronted the woman on Friday during her court appearance, asking why she stole her baby.

Lihle's father, Sthembiso Gqibile, said he was happy to have his child back.

"I couldn't eat or sleep because I was worried about my child. What if this woman sold my child or harmed him for whatever reason? People are evil out there," Gqibile said.

A neighbour, who asked not to be named, said the woman accused of abducting the toddler had given birth in August, but her baby died at birth.

Another resident, Nthabiseng Motloung, said the community had searched for the woman at her boyfriend's place in the area, but hadn't found her.

"We found the boyfriend and he confirmed the woman had arrived at their place with a child. He said she left abruptly after he peppered her with questions regarding the child," Motloung said.