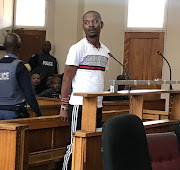 Image: Tankiso Makhetha The case against the 36-year-old man arrested for the murder of student Palesa Madiba was moved to the high court.

The case against the man accused of killing University of Johannesburg student Palesa Madiba was on Monday transferred to the high court in Johannesburg, the NPA said.

The accused, Dumisani Mkhwanazi, had earlier appeared in the Protea magistrate’s court.

NPA spokesperson Phindi Mjonondwana said: “The matter against Mkhwanazi has been officially transferred to the high court in Johannesburg wherein a pre-trial hearing will be conducted on October 25 2019 to determine trial readiness of both the defence and the state.”

Madiba disappeared in August 2013 after having had visited her friend for a long weekend.

After two-and-a-half years of searching, it was found that Madiba never made it out of that home in Phiri, Soweto.

She was murdered and buried in a shallow grave in the backyard.

This year, almost six years after Palesa was last seen alive, her alleged killer, who happens to be her friends’ uncle was arrested for the murder.

Mkhwanazi’s niece, Matshidiso, who Palesa had been visiting is among those who will testify against him in the trial.

He faces a string of charges including murder and defeating the ends of justice.