I'll leave SA if he gets bail, says battered wife 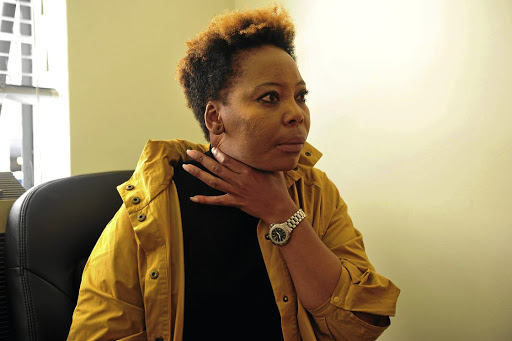 Nthabiseng Dikgale recalls how her estranged husband choked her and thought she was going to die. /Veli Nhlapo

A 39-year-old woman, who was left fighting for her life after she was attacked allegedly by her husband, is considering leaving the country should the man get bail.

Nthabiseng Dikgale was rescued by security guards while her husband Matome allegedly choked her at her apartment in Meyersdal, southeast of Johannesburg.

Matome's application for bail will be heard tomorrow at the Palm Ridge regional court. He is seeking bail on the grounds that his business will suffer financial loss and the jobs of his employees will be on the line while he is in jail.

Matome is facing a charge of attempted murder and violating a protection order.

Speaking for the first time after being released from the hospital after spending three days in intensive care unit, Dikgale said she was tired of living in fear.

"This was not the first time he had strangled [choked] me or tried to kill me. Last year, he chocked me using a towel, but he let go before I could lose my breath," she said.

Dikgale said she never enjoyed her 10-year marriage because of a series of abuse that began from small arguments and escalated into physical fights.

"At the beginning of our marriage, he was not beating me, but he was emotionally abusive. He would take my car keys and phone after arguments then not talk to me for days and eventually weeks," she recalled.

She said things kept getting worse as he became more aggressive that he ended up pointing a gun at her.

Dikgale also alleged that Matome forced her to withdraw more than three cases of domestic violence and assault against him.

"He has a problem of excessive drinking and whenever I tried to reason with him, he would fight me and hit me in front of the children and our helper," said Dikgale.

The emotional mother said she told her husband that she would file for divorce if he did not change his aggressive behaviour.

"He said 'If I can't have you no one will' and I did not think he meant it.

"He kicked me out of the house then later came back to apologise and we reconciled."

Dikgale said in February she decided to move out because things got bad.

In recent weeks, we have seen women take to the streets of SA to bring to the fore the scourge of violence against women and children.
Opinion
2 years ago

"Just three weeks after I moved out to my mom's place and refusing to speak to him, two men came to my parents' house and shot me four times."

She said three bullets were aimed at her legs and the last one on her upper body. But she said her last attack was the most horrifying one.

"The shooting was not as bad as being choked until you pass out. I remember him choking me so hard after he gained access to the apartment that Friday morning.

"I found myself apologising hoping he would let go. But he pressed tighter until I gave in. I thought I was going to die and I woke up in hospital."

Dikgale said Matome had been stalking her for months, trying to gain access to her new place, but she refused to meet him.

"Not only am I scared of him, his children fear him too because he has abused me in front of them for years.

"I don't feel safe and if he gets bail I fear he will come to finish me off, kill the kids and himself because our story being in the media has exposed him. I will skip the country [if he gets bail]."