Durban inmate rearrested after two months on the run 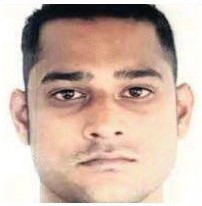 Murder accused Ashen Vishnudath, 27, was rearrested by police on Monday after escaping from custody at Westville prison in August.
Image: Twitter/@Abramjee

An awaiting trial prisoner who escaped from Durban's Westville prison two months ago  by using another prisoner’s particulars has finally been rearrested.

Ashen Vishnudath, 27, was rearrested by members of the provincial organised crime unit in the early hours of Monday morning at his hide-out in Umbilo.

According to police, Vishnudath was in custody for the death of Navandren Govender in March this year.

In a media statement police said Vishnudath was expected to appear in the Pinetown magistrate’scourt on Tuesday on charges of escaping from lawful custody.

"On 15 August 2019, Vishnudath was awaiting trial at Westville prison when he allegedly used another prisoner’s particulars to escape. A case of escaping from lawful custody was opened at the Westville police station and the docket was assigned to provincial organised crime unit for further investigation."

Vishnudath's father, Raj, 53, was arrested on Friday in Reservoir Hills for defeating the ends of justice. He is expected to appear in the Pinetown magistrate’s court on Monday alongside two awaiting prisoners, Sudeshan Govender, 34, and Tashlin Israel, 27, who were arrested on August 17 for aiding Vishnudath's escape.

Police have arrested a second suspect believed to be involved in the murder of Shaun Douglas Chabalala, who was pushed from the 7th floor of a block ...
News
2 years ago

Eastern Cape police, acting on a tip-off, foiled a post office robbery and arrested seven suspects in Butterworth in the early hours of Friday.
News
2 years ago

Police swoop on suspects as they flee from Durban supermarket robbery

Swift police action led to the arrests of five suspects, aged between 17 and 24, shortly after a business robbery in Phoenix, north of Durban, on ...
News
2 years ago
Next Article