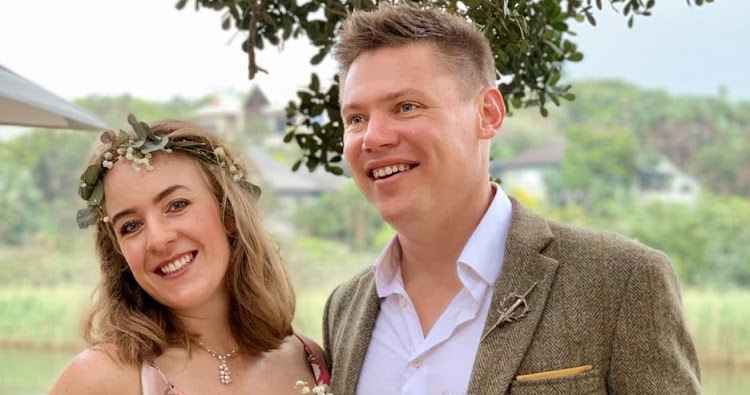 Toni Parsons and James Rycroft urged family, friends and well-wishers at their wedding to donate towards settling outstanding Rhodes University fees for students who were battling.
Image: Supplied

Rhodes University alumni James Rycroft and Toni Parsons have donated cash they raised in lieu of gifts from their wedding to the Eastern Cape institution to help settle outstanding student debt.

Rycroft and Parsons were married this month in Southbroom, on the KwaZulu-Natal south coast.

Their decision was inspired by another Old Rhodian and mutual friend, Natasha Joseph, the university said in a statement. She has been running an annual call for contributions to clear students’ fee accounts in lieu of buying her birthday presents.

“Earning a degree is often a key life moment for a young person and we felt strongly about directing some of the resources of our community to helping a few young people at the university to graduate,” said Rycroft.

Parsons said: “We believe that earning a degree should not be inhibited by your [in]ability to pay. A degree from a quality university like Rhodes University can lead to serious opportunities when you enter the world of work. The contributions made by our community are intended in that spirit — to help those students who are unable to graduate, not because they did not meet academic standards, but because they were unable to raise cash.”

Several South African artists, including Parlotones frontman Kahn Morbee and DJ Mark Stent, have called on the SABC to pay R250m in royalties ...
Entertainment
2 years ago

Vice-chancellor Dr Sizwe Mabizela, in a letter to the couple, welcomed the “profound gesture".

“This has impacted me deeply. It proves, once again, the calibre and well-roundedness of our graduates. At a time when young couples would normally and naturally only think of their own comfort and improving their lives, they have both actioned a social purpose and are living proof of our alumni.”

The amount raised was not disclosed.

During their time at Rhodes University, the couple received a one-year bursary award from the English Olympiad. They met in 2001 while Parsons was reading for her bachelor of arts honours and Rycroft was doing a BA degree, both majoring in English.

“We lost touch after graduating and it was through Facebook that we reconnected. We met again in 2016 through our dear friend Natasha, and got engaged in 2018 in Esizindeni, near Coffee Bay, during our December cross-country road trip,” they said.

Rycroft, 36, born and bred in Durban, is a third-generation Old Rhodian. His maternal grandmother spent a year at the university, before transferring to the University of Cape Town, and his father and brother also studied there.

Parsons, 37, was born in Johannesburg and went to boarding school in Potchefstroom.

Rycroft owns a management consultancy business and Parsons juggles TV production with researching for her master’s degree in gender and religious theory from the University of KwaZulu-Natal. They live in Durban.