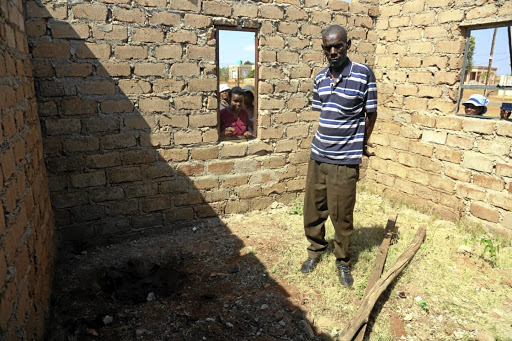 A 28-year-old mother has been arrested for allegedly killing and burying her son in a shallow grave after apparently feeding him crushed glass.

Neighbours have told of how the woman's five-year-old daughter spilled the beans about the murder, confirming their suspicions about the boy's mysterious disappearance.

The decomposing body of Katlego Mokwana, 11, was found buried in a shallow grave inside a half-built three-roomed house in Hlalanikahle section of Sekhukhune, in Limpopo, on Tuesday.

Neighbour Ernie Makua, 45, said: "The five-year-old girl broke the news last week after we have been worried about the whereabouts of baby Katlego to a point where we confronted the mother.

"[Last month] the mother told us that Katlego had visited his father in Pretoria since it was school holidays. We then called the police last week who took her in for questioning, but she returned the same day."

Makua said after the woman's daughter revealed the details of how Katlego disappeared, they confronted her again. "The child told us that on the fateful day, her mother had only provided food to Katlego and stopped her from eating it. [But] when we confronted the mother, she insulted us," Makua said.

Another neighbour, Sinky Mokalapa, 47, said: "We don't know the motive but she confessed to killing her son when we ganged up on her as mothers. We demanded that she tell us the truth about her son's whereabouts."

Mokalapa said on Tuesday, they saw the woman carrying bags, trying to flee.

"She was about to board a taxi when we stopped her. And when people started threatening to beat her up, she confessed that she had killed her son and buried him in the bushes.

"But when we demanded to take her to the spot where she claimed she buried he son, she retracted and led us to the house instead."

Makua and Mokalapa told Sowetan the five-year-old daughter was taken by her father shortly after the gruesome discovery of the body of the 11-year-old. It was still unclear yesterday whether the deceased child and the five-year-old share the same father.

Police spokesperson Brig Motlafela Mojapelo said: "Police investigations led them to a spot in the yard where the body of the child was found buried in a shallow grave. The motive for this incident is still unknown at this stage. The suspect will appear in Hlogotlou magistrate's court soon."

The woman's landlord Reginald Leshapa, 52, said he was still in shock.

"I received a call that people had gathered in my yard. When I got there, I found people demanding answers from my tenant. After a few minutes, the mother led us to the house but stopped at the door. I started walking around the house and I spotted a heap of soil which I have never seen before," he said.

Leshapa said he took his shovel and handed it to a police officer, who only dug four times before making the gruesome discovery. "The body was in a zipped black bag."

He said the woman started staying at his house last year.

MEC for social development Nkakareng Rakgoale said: "Parents are supposed to love and nurture their children, not to abuse and kill them. The murder of this 11-year-old happens at a time when we as government are waging a serious war against the killing of women and children."