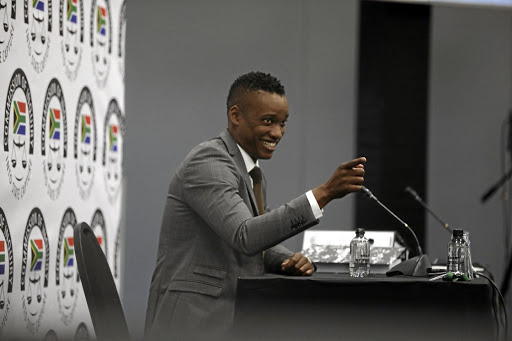 Duduzane Zuma intends on suing the state for R1.5m for unlawful arrest in his corruption case.

He said he will sue the police for unlawful arrest and detention and he will also sue the National Prosecution Authority (NPA) for malicious prosecution.

The police arrested Zuma in July last year after former deputy finance minister Mcebisi Jonas told the commission that Zuma was in the room when one of the Gupta brothers offered him a R600m bribe and a ministerial position.

The corruption charges were provisionally withdrawn in the specialised commercial crimes court in January with the NPA citing that they want to allow a key witness, Jonas, to finish giving testimony at the commission.

Zuma's lawyer Rudi Krause yesterday told Sowetan they sent the police and the office of the national director of public prosecutions letters of intent to sue on July 23 in relation to the corruption case.

Sowetan has seen a letter from the police, signed by a Lt-Col E Els in the office of the national police commissioner, dated August 14 which acknowledges receipt of the letter from Zuma's lawyer. NPA could not confirm receipt of such a notice.

Krause said they were perplexed by how the police would arrest Zuma when Jonas, on whose evidence the arrest was made, had not made any statement to the police and would most likely be cross-examined.

"It's difficult to comprehend on what basis a magistrate could issue a warrant on somebody based on the person whose evidence is being questioned," said Krause.

In re-examination by his lawyer Piet Louw SC, at the Zondo commission of inquiry into state capture, Zuma said he was angered by his arrest at the OR Tambo International Airport in July last year after he returned to SA for his younger brother's funeral.

I'm not a criminal - Duduzane Zuma

Duduzane Zuma has told the state capture commission of inquiry that he has suffered a lot of consequences, including being seen as a face of ...
News
2 years ago

Zuma's lawyer said they would also be sending the notice of intent to sue the NPA in the "next couple of days" for malicious prosecution in the culpable homicide case in which he was found not guilty this year.

Zuma was found not guilty of culpable homicide by the Randburg magistrate's court in July after the court found that he was not negligent in the fatal crash that claimed the life of Phumzile Dube in 2014 when his Porsche crashed into a minibus taxi in Johannesburg.

He said the NPA decided to revive the case last year without any new evidence.

The NPA initially declined to press charges as it believed there were no prospects of a successful prosecution.

"Our claim will be based on malicious prosecution. They correctly directly declined to prosecute [initially] as there was not evidence of negligence and then all of a sudden, in the absence of new evidence, that decision was reversed when the state didn't have a case to start with," said Krause.

Zuma also told the commission that he was an innocent man caught up in a political storm.

"There have been quite a few consequences. There are three levels to this scenario that need to be satisfied: the first being political, then legal and perception ... The court of public opinion is driven by a narrative that stems from media reports," he said. - Additional reporting Amil Umraw

His father Jacob Zuma may have the ability to charm masses, especially in the ANC, but Duduzane Zuma’s charm, which he clearly got from him, goes ...
News
2 years ago
Next Article