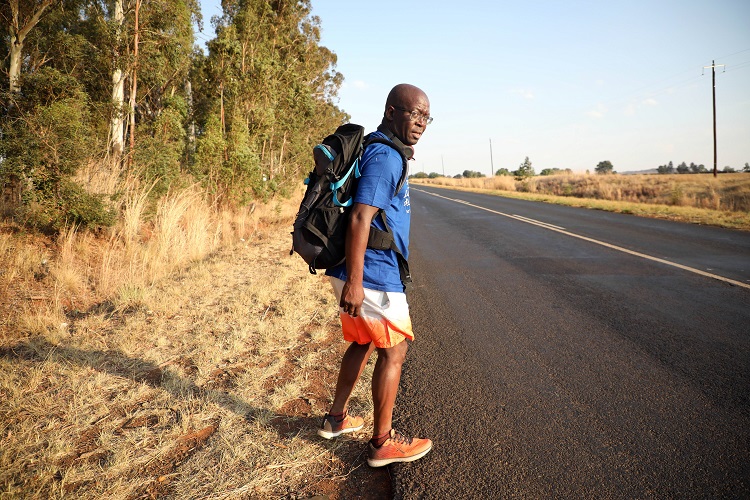 Sowetan caught up to Fred Khumalo on the R103
Image: Antonio Muchave

Author and journalist Fred Khumalo began a long march on Monday to commemorate 7,000  Zulu men, women and children who walked from Johannesburg to Durban during the Anglo-Boer war.

"It took them 10 days to reach Ladysmith where the march came to an end, with one section of the marchers veering off to Zululand, while others went to Natal," said Khumalo.

"Marwick and some of those who could afford [it] then boarded a train at Hattingspruit station, all the way to Pietermaritzburg," hesaid.

Khumalo said not a single fatality was reported during the march,although some people did collapse of exhaustion.

"This is the story, therefore, that I have turned into a novel mainly because I am such a sucker for history," he said.

Khumalo started his 10-day estimated walk from Wits University in Johannesburg at 5.40am on Monday and had walked over 10 hours by the time Sowetan spoke to him.

After walking 51.4km, Khumalo looked very tired. Speaking to Sowetan on the R103  highway towards Heidelberg at about 4.46pm, Khumalo said: "I am tired, this is hell, but I'm determined to finish the walk which I expect to finish in 10 days, then launch my book in Durban on October 17," he said.

For as long as the lion cannot write or read, the story of the hunt shall always be told from the point of view of the hunter.
Opinion
2 years ago

Khumalo's lips were dry, his eyes were red and he was looking drained from the baking sun he had been walking under.

Khumalo said his wife would be assisting him and driving to his stops to give him a change of clothes and refreshments.

Khumalo said the walk is aligned to his recently published book The Longest March.

"I wanted to bring the story out into the public domain. [It] is those pockets of our history that have been hidden from the public for political expedience," he said.

Khumalo has written 11 books including Dancing the Death Drill published in 2017. The book is about the sinking of the SS Mendi, a ship that killed hundreds of black soldiers during World War 1.

Khumalo said the first day of his walk was a challenge after his driver ditched him at the 11th hour.

"The person who was meant to assist me with changing clothes and relief material demanded more money in the last hour so my wife stepped in," he said.

"I have over seven stops from now - Balfour, Standerton, Newcastle, Dundee, Volksrust, Ladysmith, then Durban for the  official launch."