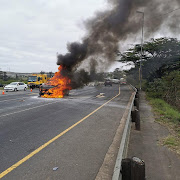 Image: Supplied. A vehicle burst into flames on Durban's R102 on Saturday.

A car burst into flames on the R102 in Durban on Saturday.

According to private security company Reaction Unit South Africa (Rusa), the driver of the car said that he was on his way home when he noticed smoke coming from the engine.

"When he opened the bonnet the vehicle burst into flames. The cause of the fire is yet to be established," Rusa said.

The incident happened on the northbound lane near the Phoenix intersection. Motorists have been warned to steer clear of the area. Members of  the eThekwini fire services and police are at the scene.