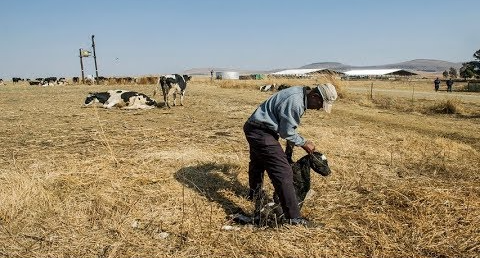 Former head of the Free State agriculture department‚ Peter Thabethe‚ has denied refusing help to the National Treasury when it launched an investigation into the controversial Estina dairy farm project in 2013.

Thabethe was grilled at the state capture inquiry on Friday as he concluded his testimony‚ with evidence leader Leah Gcabashe questioning him about his involvement in facilitating the partnership with the department and the Gupta-linked company Estina.

One of the focus points of Gcabashe's questions was a 2013 treasury investigation into the deal.

In their eventual report‚ the Treasury said Thabethe was "unwilling" to assist in facilitating a meeting between their investigators and Kamal Vasram‚ then sole director of Estina.

In eluding investigators‚ Vasram relied on a confidentiality clause in Estina's agreement with the department. Vasram referred investigators to Thabethe‚ saying they needed his permission to investigate Estina.

"They wanted an exclusive investigation. I did not have the power to give the go-ahead to say‚ 'Go investigate a third party [Estina]'‚" he said.

The Free State department of agriculture did not conduct background checks on staff put in charge of the controversial Vrede dairy project - a factor ...
News
2 years ago

An ally of the Gupta family was a key part of a visit to India by state capture-implicated former Free State agriculture head Peter Thabethe in 2012.
News
2 years ago

Gcabashe said the Treasury requested Thabethe to waive confidentiality‚ which he refused.

"In the agreement‚ they (Estina) said to us as a private company they have issues they would not want to have exposed. We did not know what issues would be at stake‚" he said.

Judge Raymond Zondo jumped in‚ saying that if Estina had an agreement with the department‚ it would benefit from taxpayer money‚ and‚ therefore‚ the Treasury had the right to investigate.

Thabethe said: "Maybe at that time there was a misunderstanding. I never had a problem with the investigators speaking to him [Vasram]. My issue was that they needed permission from me.

"During the meeting I had with them [Treasury investigators] they were not able to say to me 'our interest goes up to this far'. If that was the case‚ I shouldn’t have had a problem."

The commission will resume on Monday.