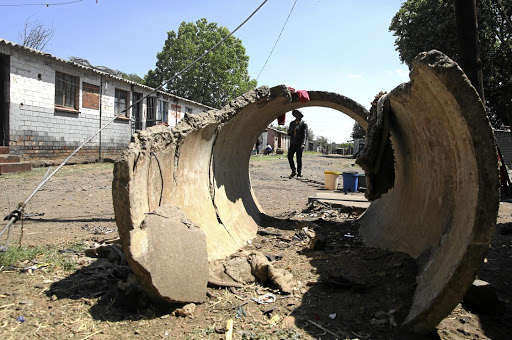 Hostel dwellers at the Nancefield Hostel in Soweto have taken their their grievance over electricity to the streets, barricading roads and stoning cars on Wednesday.

Three security officials were attacked and at least 19 cars damaged when a group of people stormed and vandalised a City Power depot in Klipspruit, Soweto.

City Power spokesperson Isaac Mangena said the incident could be related to an electricity protest that started on Wednesday.

"The suspects who are suspected to have been part of a community protest over electricity stormed the depot near Nancefield train station on Wednesday evening, held up and allegedly assaulted the three security officials on site," Mangena said.

"They allegedly broke into locked offices and stole computers. The suspects then stole a City Power Toyota Quantum minibus, and broke the windows of at least 15 cars on site, seven belonging to the staff, and eight to the City Power, including trucks."

"No one was inside the offices during the break-in. The City Power CEO has called for a thorough investigation," said Mangena.

He said an urgent meeting was convened by management with affected staff. The injured security guards received medical attention and counselling is being provided.

An assessment is under way to determine the extent of the damage.

"City Power is working with police and group forensic division who are investigating the issue. We urge the members of the public to help with any information that could lead to the arrest of the suspects," added Mangena.

Meanwhile, hostel dwellers at Nancefield Hostel said the riots were sparked by lack of power in the area for nearly three days due to an alleged cable theft.

Hostel induna Alson Manana said they have experienced power cuts in the area for over five years.

"We have been trying to engage with the municipality to assist us with the problem... The cable that supplies power to the hostel is situated in a public pavement next to a Rea Vaya bus station it gets dug up and replaced every week... that's the problem," explained Manana yesterday.

He said they suspected there was a syndicate stealing cables around Klipspruit and Nancefield.

"We had placed volunteers from the hostel that take turns to guard the cables but unfortunately two of our residents were shot and killed by the thieves."

Another elder at the hostel, Eric Zwane, told Sowetan there was a lot of criminality around the hostel.

"They (criminals) terrorise, rape and rob people. They also stone cars, but none of that has to do with addressing the electricity problem here."

Sgt Khalipha Mvula said the riots began as a genuine protest then escalated to public violence.