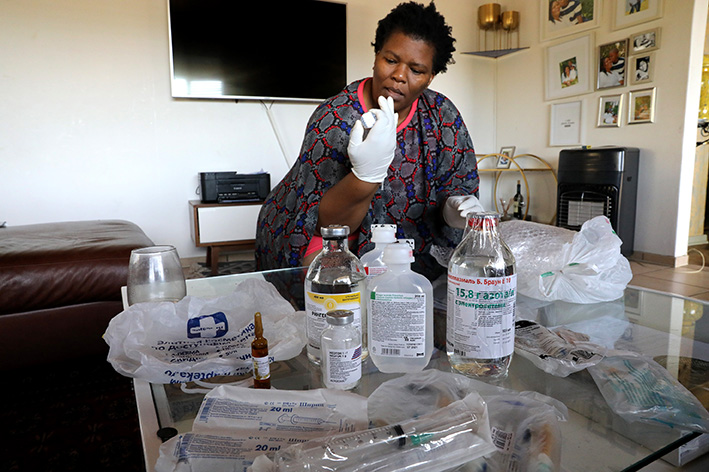 On Tuesday, a collection of drugs and medical equipment labelled in Russian was found abandoned in Rakhimov’s East London hotel room.

Bottles of drugs, some half used, others still full and sealed, syringes, intravenous drips, bags and tubing were discovered by SA fight promoter Nomfesane Nyathela of Rumble Africa Promotions.

She said that after dropping Rakhimov at the airport on Tuesday she went back to use the fighter’s room at the Premier Hotel East London ICC because it was booked until Wednesday.

While resting, Nyathela said she noticed the drugs and equipment on the table.

The Russian team admitted the drugs belonged to them.

One of the bottles was labeled “Neoton” with the subheading “phosphocreatine”.

She said all the bottles and equipment were being sent to Boxing SA for tests before further action can be taken.

Asked about Neoton, BSA chief executive Tsholofelo Lejaka, said: “It is difficult to say without seeing the container and listed ingredients.

“Many of the supplements have names that are not related to their ingredients.

“For instance, creatine is a substance which is not banned, but it is often mixed with other substances, which may be banned, in order to achieve the desired effect.”

Three firearms – two of them allegedly stolen from security guards and a third licensed to an owner in East London – were seized when police stopped ...
News
2 years ago

The find adds ammunition to the Fuzile camp, which has already lodged a protest with the IBF over an incident during the fight in which they claimed Rakhimov’s assistant trainer, Ruslan Agishev, was caught on video administering smelling salts to the nostrils of the Russian boxer.

This happened between round seven and eight of the highly charged bout at the Orient Theatre in East London on Sunday.

If this is true, it would constitute a doping violation and, depending on the merits of the case, could mean the fighter could be disqualified.

The Russians, who denied using banned substances during the fight, nevertheless admitted that the medical stash in the hotel room was theirs.

Rakhimov’s manager, Aleksey Titov, told DispatchLIVE the liquid-filled bottles belonged to him. He said he was treating himself to recover from flu in preparation for a marathon in Russia.

“Yes, those things were used by me because I could not bring a nurse with me to South Africa,” he said.

Asked on Wednesday what was being waved under his boxer’s nose, Titov said it was “an adrenalin used to stop nose bleeding”.

“That thing is allowed. I do not understand what the excitement is all about,” Titov said.

Amid the row, the Russians complained about the absence of doping agents at the fight.

There were also no inspectors to police the use of illegal substances in the corners.

Titov said: “We do not understand why they were no doping agents and no inspectors in the fight. To us, we found that very odd.”

The absence of inspectors may deal Fuzile’s protest a blow as there is no evidence that the substance seen on video is indeed smelling salts, which are banned.

BSA, which also sent a letter of protest to the IBF regarding Rakhimov’s use of the substance, shifted the blame to the IBF for failing to provide doping agents and inspectors. “That should be an IBF responsibility because they were supervising the fight,” said Lejaka.

The IBF was represented by its president, Darly Peoples, but the Fuzile-Rakhimov bout was supervised by South African official Neville Holtz.

Lejaka said the IBF had the responsibility of ensuring doping agents and inspectors were available.

Nyathela said the SA Institute For Drug-Free Sports was invited to attend the bout. “But we were also surprised when they did not send their agents.”

Titov insisted that his boxer won the fight fair and square and was now looking forward to challenging IBF champion Tevin Farmer.

Asked if the IBF had informed them of the protest he said: “No, it is the first time we are hearing about this from you. Fuzile must stop being a sore loser. We beat him fair and square.”

Several attempts to get a comment from the IBF drew a blank.