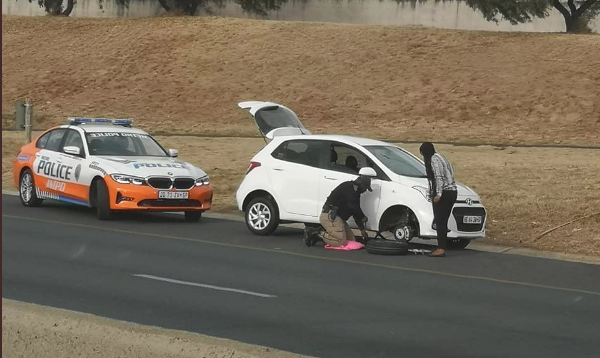 A picture of a JMPD officer changing a woman's tyre has gone viral.
Image: Twitter/Faizel Patel

A Johannesburg Metro Police Department (JMPD) officer is getting all the love on social media as people applaud him for going beyond the call of duty. This after pictures emerged of the officer changing a woman's car tyre.

According to Truth and Justice's Facebook page, the incident was witnessed by Kushie Pieterson on the M1, next to Woodmead Retail Park, on Wednesday.

On Twitter, the pictures have gone viral and caught the attention of police chief David Tembe, who said the city's officers aim to serve and protect with pride. Some tweeps have also shared stories of their positive encounters with the Johannesburg's police officers.

Thank you for the feedback. Our @JoburgMPD officers always aim to serve & protect citizens with Pride & Dedication.

I’ve been helped by a cop before. My spare was flat too, they went to the nearest petrol station to inflate it while I waited at the police station. They came back and changed my tyre while cracking jokes to ease my frustration ❤️

We have honorable civil servants at JMPD. Welldone Officer.... pic.twitter.com/vofIuAabT5

Actually saw the same thing in Somerset West over the weekend! #metropolice helping a woman change her tyre next to the highway
Well done guys! Keep it up! @WesternCapeGov

It may not trend, but there are good Traffic Officers out there. pic.twitter.com/8txS9nE2fv

Without taking the shine off JMPD, something similar also happened to my Mom and i in Durban on the N2 by Higginson... Two Metros stopped to helped us when we had a car issue. They even drove behind us until we were safely out of harm's way. So yes its a beauty 2see

This hero metro officer was spotted today helping this lady along a busy road. This is the South Africa we know and love. ❤?? pics via Kushie Pietersen on FB. pic.twitter.com/fpx22PNH3q