Mineworkers' killer gets 25 years in prison 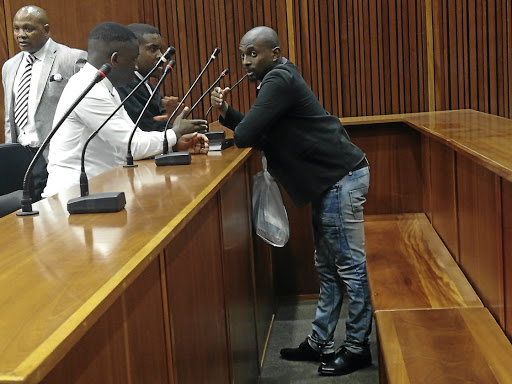 Convicted murderer Kgaugelo Moime, who made a deal with the state, talks to his lawyers after sentencing.
Image: PETER RAMOTHWALA

One of the four men accused of killing six mineworkers when they set the bus they were travelling in alight last year has been sentenced to 25 years' imprisonment for each count of murder.

He was sentenced to a further 10 years in jail for each count of attempted murder of the surviving mineworkers.

Judge Ephraim Makgoba yesterday commended Moime for pleading guilty and turning state witness against his three other accused in the Polokwane High Court.

"You've shown this court signs of remorse and this will count in your favour. You have undertaken to testify as a state witness against your friends. Because of those circumstances, you will be treated differently and your sentence will run concurrently," he said.

A 19-year-old man who was stabbed to death and his friend seriously injured during an apparent robbery on Clifton 3rd Beach in Cape Town on Saturday ...
News
2 years ago

Makgoba added that the court had decided to show mercy to Moime for cooperating with the state. He also ordered that Moime be kept at a separate location from the other accused to avoid any obstruction of justice.

Makgoba said the other accused Sipho Khumalo, 29, from Driekop, Philemon Makwana from Mohlake and Thabo Mokgala, 28, will have their trial in April.

The state alleged that in April last year, the mineworkers were travelling to Modikwa mine by bus during a strike.

"When the bus arrived at Dinokeng, the accused were in the queue with other miners and also boarded the bus. One of the accused was seen carrying a container and he poured the contents of the container inside the bus and it was then set alight," read the indictment.

The indictment further stated that passengers jumped out of the burning bus. Some of them were injured, others were burnt to death. The cause of death was given as "unascertained due to charred body".

The state alleges that the accused acted with common purpose.

Reacting to Moime's sentencing, one of the slain mineworker's wife Mavis Mahlokwane said she was not pleased because it meant the self-confessed murderer was still going to come out of prison and enjoy his life.

"I lost my husband in the most brutal way and the state makes a deal with the devil. He is not going to stay for those 25 years, he will be released on parole. He took away someone special from me and I will never see my husband again."

She said her husband was a breadwinner and that his killers deserved to rot in jail.

Another widow, Letta Komana, said the sentence handed to Moime was too lenient.

"I'm not satisfied with the sentencing; how can someone who killed many people get a mere 25 years? All of them deserve to go to jail and never come back," she said.