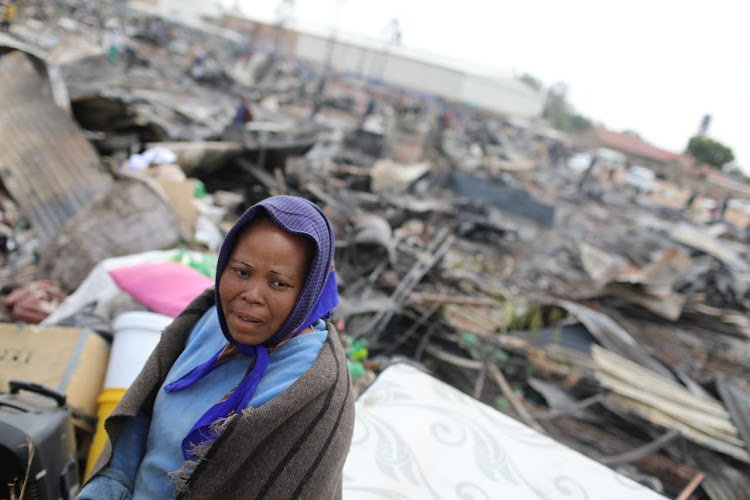 One of those affected by the fire, Matsepang Koena.
Image: Sunday Times/Alaister Russell

Help will be given to about 900 people left destitute after a fire swept through Pomona informal settlement in Kempton Park on Monday night, Ekurhuleni mayor Mzwandile Masina said.

The city’s emergency services said more than 200 shacks had burnt down.

“We are now in a better position to help the community, so we’re calling for calm, calling for them to allow us to work with them,” said Masina.

He was speaking on Tuesday afternoon, shortly after a walkabout at the settlement.

Teddy bear, passports, blanket and baby - all mom could save in Kempton Park inferno

Lebohang Selai was ready to sleep after her 23-month-old son had closed his eyes when she heard the screams: “It’s burning, fire, fire!”
News
2 years ago

“We have been able to set up a joint operation team, which is going to work collectively to assist the community to rebuild. We’re now ready to provide food, blankets and alternative shelter,” said Masina.

Among those affected by the blaze was Sewela Mafela, who is originally from Ga-Sekhukhune in Limpopo. The mother of two boys slept helplessly on top of a mattress, surrounded by a few household items she could save, on the side of the road.

Mafela, who survives through selling fish and chips, said that among other things, she’d lost her stock and R450 cash.

Over 200 shacks and around 900 people were left homeless when a fire swept through an informal settlement in Kempton Park on Monday evening.
News
2 years ago

“I am tired. I don’t know what to say or do. I lost everything, every cent I had,” she said, with tears running down her face.

As if the pain was not enough, she still had to explain what happened and provide for her two children.

“They wanted to go to school but their uniforms burnt. They want food and everything, and I must explain there’s nothing. It is heartbreaking,” she said.

Masina said the city had made arrangements with three community halls and two churches around the Kempton Park area because it was mindful that there had been children who were meant to attend school.

Walking through the settlement, all that was left in the aftermath of the blaze by midday were pieces of blackened metal, burnt beds, corrugated iron and ashes.

While the city had measures in place to help the residents, it also faced a challenge with the person who owned the land on which the settlement had been built.

“There is a complex issue of a land owner, a private land owner who had a court order, who really wanted these people gone here … So we are seeing tensions. That is why the community don't want to move,” he said.

Masina said he was hopeful his team would reach an amicable solution with the land owner.

“We’re still hopeful that the negotiations that my team is having with the community will lead us to moving these people from here, even if it's just for a day, to a temporary shelter where we can register all of them, ensure they get their IDs, bank cards and other critical documents so that the process of rebuilding can start,” he said.

Masina said that after several meetings, the national government had allowed the city to use the disaster grant fund to assist the affected residents. He assured residents the situation would return to normal by the weekend.

Gift of the Givers was on the scene giving out food parcels by Tuesday afternoon.

A fire broke out at a textile factory in Mooi River in the KwaZulu-Natal Midlands on Friday.
News
2 years ago
Next Article