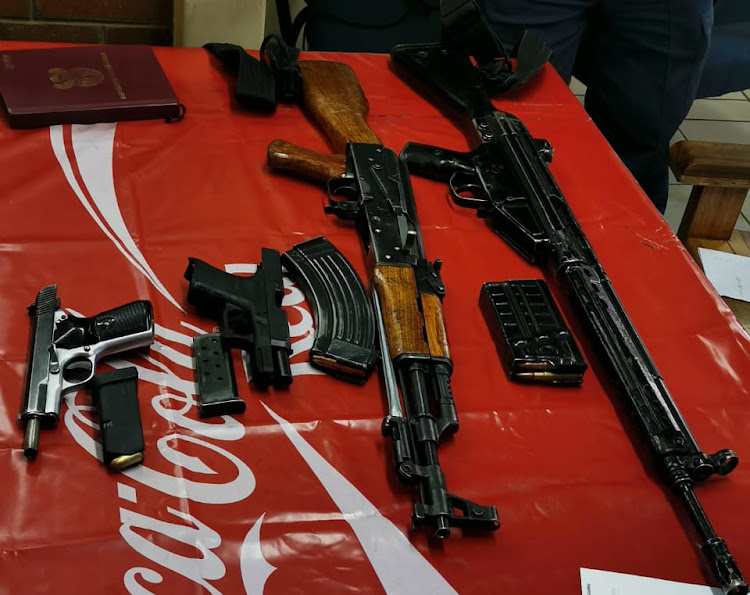 KwaZulu-Natal police seized a number of weapons, including an AK-47, an R1 rifle and two pistols, at a funeral near Pietermaritzburg on Sunday.
Image: supplied

Mourners pelted police with stones when they tried to arrest a group of men who allegedly fired a volley of gunshots during a funeral in Mpumalanga, outside Pietermaritzburg, on Sunday.

According to SAPS provincial spokesperson Brig Jay Naicker, police were monitoring the funeral of an alleged drug dealer at Mophela cemetery when shots were fired in what was believed to be a gun salute.

“The police officers heard the gunshots during the funeral and they responded. They identified the alleged perpetrators and approached them. While police attempted to disarm the perpetrators, a group of mourners pelted the officers with stones and other objects, obstructing them from executing their duties,” said Naicker.

Hawks arrest 'dealer' with R74,000 worth of drugs in plush Durban suburb

A 28-year-old man was arrested with drugs with an approximate value of R74 000 in the plush suburb of Morningside in Durban on Thursday.
News
2 years ago

It was sad to watch as relatives of drug mule Nolubabalo "Babsie" Nobanda emotionally welcomed her back home yesterday after she spent eight years in ...
Opinion
2 years ago

Police were unable to arrest the alleged perpetrators but recovered four unlicensed firearms, including an AK-47 assault rifle, an R1 rifle, two pistols and ammunition.

“The suspects managed to escape during the attack on the police officers. Police are still pursuing the suspects as they are known, and hope to make arrests soon,” said Naicker.

“This poses a danger to innocent bystanders attending the funeral. We will continue to deal decisively with those who partake in such illegal activities, and we call on communities to stand up and deplore the behaviour of thugs who place lives at risk,” said Jula.

Naicker said the guns were taken for ballistic tests to establish if they were used in any other crimes.