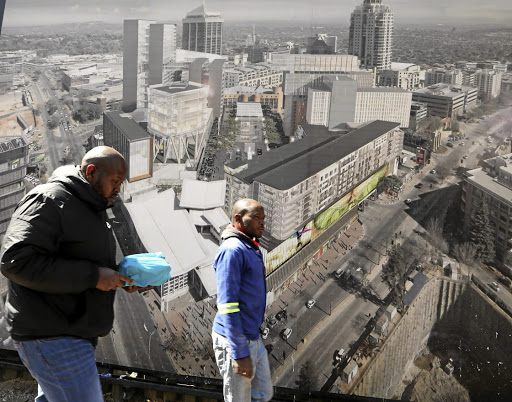 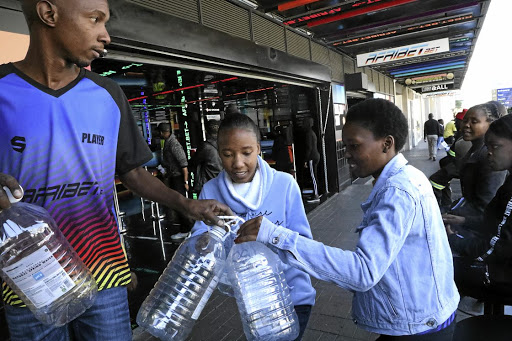 Part of approximately two-hectares of prime land in the heart of Sandton that has become a bone of contention in the City of Johannesburg still lies idle six years after a high-rise property development was promised.

The land is nestled between the posh Michaelangelo Hotel and the R10bn Sandton City. Part of the land, leased to the Sandton Gautrain station, is a hive of activity.

Patrons walk past a long colourful wallpaper showing images of what was supposed to be a world-class mini city on top of the busy Gautrain station.

Logos of developer, Kgoro Central with the artist's impressions of the units, mask the walls around the station. The wallpaper advertises "13 apartment types".

Three weeks ago the City of Johannesburg cut off water supply to the property after it said its landlord, Cedar Park Properties 39, had failed to pay property taxes since 2013.

The decision by the council to cut the water to the station sparked a court battle that has unravelled what may be the biggest property scandal in the city.

Give us back our land - Herman Mashaba

The City of Johannesburg is racing against time to wrestle back a piece of prime land in Sandton that was "gifted" to Gautrain station landlord in an ...
News
2 years ago

The city said Cedar Park was "gifted" the land in 2009 as the city took a bond to finance its sale to a private company. The city also bemoaned that the sale agreement signed at the time purported to waive payment of rates and taxes by the company.

Cedar Park, a company with no track record, no experience and established just a couple of months earlier, was awarded the prime land in the heart of Sandton by the city with a promise to turn it into a multibillion-rand, high-rise property development.

Mayor Herman Mashaba said Cedar Park, a company with questionable ties to the Guptas, had been gifted the land worth R280m "irregularly".

Part of the deal was that the winning bidder must have or be able to raise R4.2bn for the development of the property which would house the busy Sandton Gautrain station and a world-class accommodation property above it.

It has now emerged that Cedar Park was owned by directors of the Gupta-linked Regiment Fund Managers, who at the time of acquiring the land enjoyed a cosy relationship with the city as they managed its R18bn sinking fund.

The agreement, which Sowetan has seen, was signed by founder of Regiment Litha Nyhonyha on behalf of Cedar Park, in which he is a director.

Cedar Park now faces possible liquidation and risks losing the prime land as Vantage Capital, a company that invested R150m in the development, wants to get its money back from the failed development.

Business owners leasing the property above Gautrain station told Sowetan they were losing revenue because they were being forced to operate without water.

One of the businesses, a hair salon, Hair Valey, had to stop "providing services that require using water".

Another business, Afri Bet, said it was struggling. "The situation has been frustrating because we have to buy water daily and staff can barely use the toilet," said an Afri Bet staffer.