Harry and Meghan hit the beach ... hours after two men were shot dead there 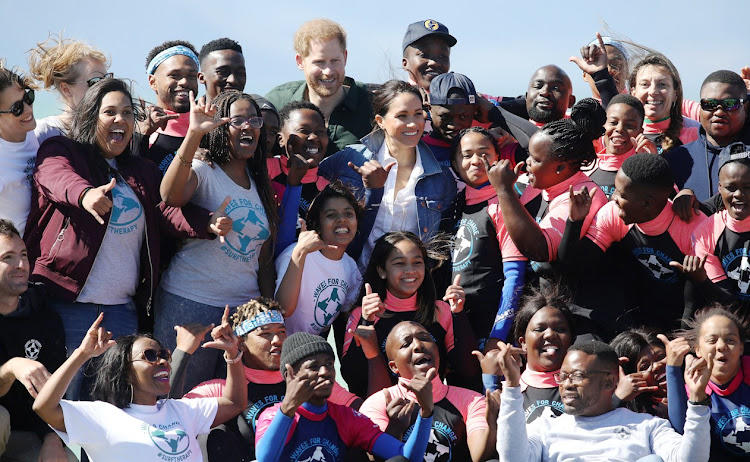 The Duke and Duchess of Sussex with Waves for Change surfers at Monwabisi Beach in Cape Town on September 24 2019.
Image: Esa Alexander

The Duke and the Duchess of Sussex braved a storm of sand to spend more than an hour with surfers at Monwabisi Beach, Cape Town, on Tuesday.

Prince Harry and Meghan Markle kickstarted their tour of southern Africa in Nyanga on Monday, and on the second day of their tour they joined a group of surfer mentors in a “call and response game” called kilo.

They also met  Dr Thomas Maes, director of the Commonwealth Litter Programme, and Loyiso Dunga, a marine biologist from the Sea Change Project. They spoke about the impact of microplastics on the ocean.

To underscore the effect, the experts also showed the couple a demonstration in a micro laboratory. Their discussion revolved around the importance of role models, including surf mentors, in creating awareness in communities. 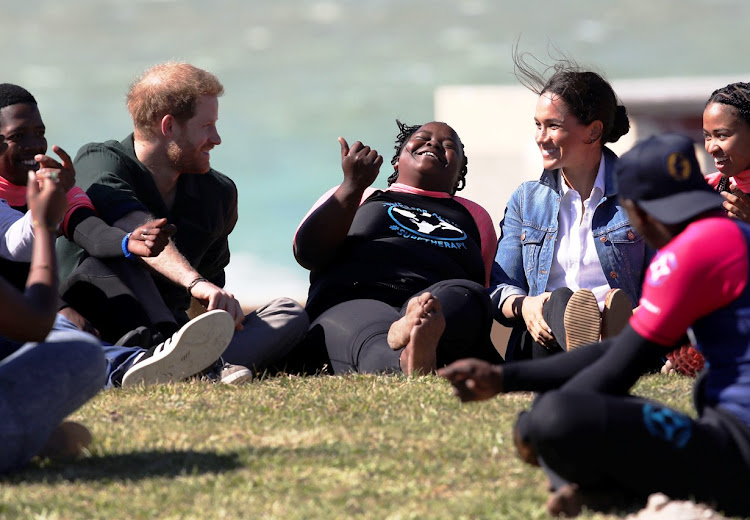 The Duke and Duchess of Sussex have fun with Waves for Change surfers at Monwabisi beach in Cape Town on September 24 2019.
Image: Esa Alexander

The royals then joined a group of  surf mentors on a sand dune and participated in a mental health exercise called the Power Hand.

The couple also learned about the work of the NGO Waves for Change, which combines surfing “with evidence-based mind and body therapy to provide a child-friendly mental health service to vulnerable young people living in challenging communities”. 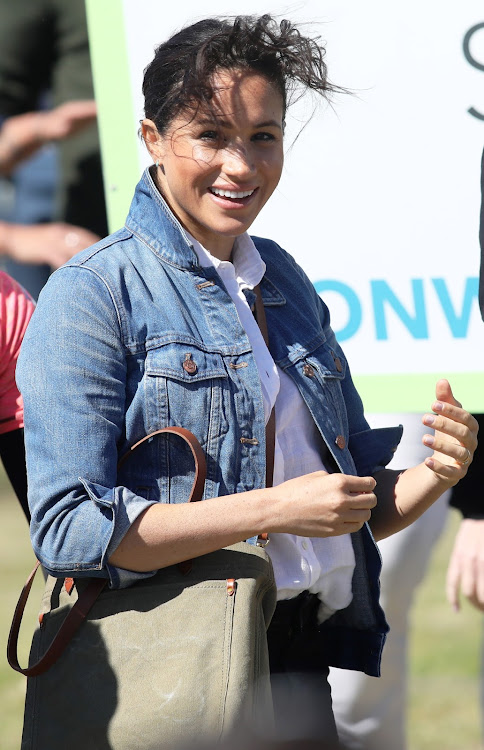 The south-easter played havoc with the Duchess of Sussex's hair-do at Monwabisi Beach in Cape Town on September 24 2019.
Image: Esa Alexander

The royals also got a chance to see the work of a charity organisation called the Lunchbox Fund, which provides nearly 30,000 nutritious meals daily to Waves for Change programmes and township and rural schools around the country.

The couple met Ndileka Wana and Priscilla Mere from the Lunchbox Fund as they prepared meals.

“The Lunchbox Fund was one of four chosen by the Duke and Duchess of Sussex to benefit from the generous donations made by the public on the occasion of the birth of their son, Archie Mountbatten Windsor,” a statement released by the royals’ communication team read.

Dozens of people waving the British flag arrived on  the beach for a glimpse of the royals. Among them was Wendy Berk, 80.

“We love the royal family,” she said. “My father was British. My daughters have been to the wedding and we absolutely adore them. We want to see the baby.”

Rebecca Cronje shared Berk’s sentiments. “I am actually British but I am married to a South African man,” she said.

“I am happy to see the royals, they are a road from where I live. It is an amazing opportunity which I cannot miss at all. I am here to see the fans and be part of it.” 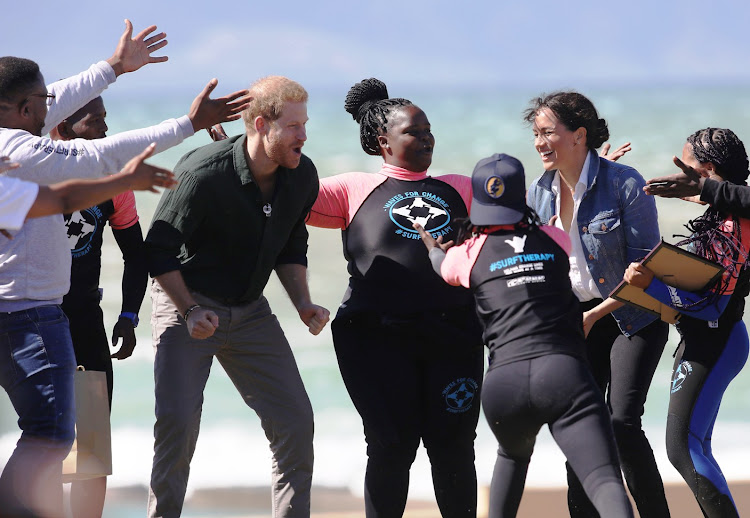 The Duke and Duchess of Sussex took part in activities with Waves for Change surfers at Monwabisi beach in Cape Town on September 24 2019.
Image: Esa Alexander

Monwabisi was under heavy police guard. On Monday night, police shot dead a 29-year-old murder suspect at the beach.

“The suspect was also sought for the murder of two Law Enforcement officers who were killed in Sweet Home Farm earlier this month,” said Traut.

“After requesting the public to come forward with information on the whereabouts of the 29-year-old suspect, who cannot be named at this stage, our members reacted on a tip-off and approached the suspect at Monwabisi Beach late last night,.

“During a shootout between members of our Special Task Force and the suspect, he and his unknown accomplice were both fatally wounded.

"The firearm the suspects were armed with, was confiscated. The circumstances surrounding the incident are now under investigation and the identity of the second suspect is yet to be determined.”