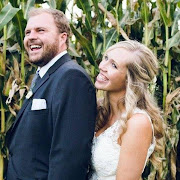 Image: via Facebook Matthew and Karen Turner were stabbed in the Hluleka Reserve, near Mthatha in the Eastern Cape, on Tuesday morning. Karen died on the scene. Matthew is in a stable condition in a Pietermaritzburg hospital.

Her heartbroken brother, Ian Crouch, on Friday revealed the last words that his slain sister is believed to have uttered to her husband, Matthew, after they were stabbed while sleeping in a chalet in the Hluleka Nature Reserve at 3am on Tuesday morning.

Crouch said Matthew had told him from his hospital bed that his 33-year-old pregnant sister did not know that she was dying when she said: “Where's Hayden? Matthew, you've got so much blood on you.”

“Matthew managed to chase their attackers downstairs. Karen ran after him. But she was stabbed in her left thigh and an artery was hit so she must have lost consciousness. I don’t think she knew the extent of her injury or that she was dying,” he said.

Crouch spoke to TimesLIVE at a Pietermaritzburg hospital where Matthew, an Underberg dairy farmer, is recovering after surgery to repair stab wounds to his stomach.

The couple's son Hayden, who turns two next month, is with his grandparents.

“He thinks he is on holiday. But he will ask for his mom soon,” Crouch said.

Matthew had told the family that two intruders were behind the attack. The trio had booked into the Eastern Cape resort on Monday to attend a wedding and to celebrate Karen’s birthday.

But hours after celebrating, her life was ended.

Matthew was airlifted from a local Eastern Cape hospital to Pietermaritzburg on Tuesday afternoon. He was transferred from the ICU unit to a general ward on Friday.

His wife’s body arrived in KwaZulu-Natal on Thursday.

Crouch said Matthew was aware of “some of the speculation” suggesting that he may have been behind the attack.

“I don’t think he knows the extent of some of the allegations that I have seen. I think if we had to explain to him the extent of it, it's not the right thing to do now because he wouldn’t cope with it.”

Crouch said the allegation was “absolute rubbish” and was an attempt to “cover up for the resort”.

He said the couple's friends, who had booked into a neighbouring chalet, had given a statement that they had heard a “commotion” so they went to help.

“I got in touch with the guy who made the initial statement. His exact words were that he heard a commotion which is now being twisted into an argument and domestic dispute. The commotion was my sister and Matthew screaming for help.”

Crouch does not believe that robbery was the motive as the couple's valuables were not taken and has his own theory.

“There are a lot of issues between the staff and the locals at the moment. A couple of days prior to the killing, the resort had actually shot some illegal poaching dogs on the resort and they are in an argument with the illegal cray-fishermen that come into the resort at night.

“We have heard a lot of information that has come in that there have been a lot of issues between the local people, who actually work there and the management, who live away. I believe that maybe the dispute got to a situation that they wanted to make a statement and unfortunately Matthew and Karen were the statement that they wanted to make with the resort management.”

The Eastern Cape Parks and Tourism Agency, which manages the establishment, refused to comment on Crouch's claim.

“The questions speak to the reserve, yes, but they lead back to the detail of the incident. ECPTA in an effort not to hinder the investigation and to allow the police to thoroughly do their work from all angles and circumstances of the case cannot comment on the above,” said ECPTA chief executive officer Vuyani Dayimani.

Police spokesperson Capt Dineo Koena said there have been no reports of illegal poaching at the reserve.

“We are still investigating the murder.”