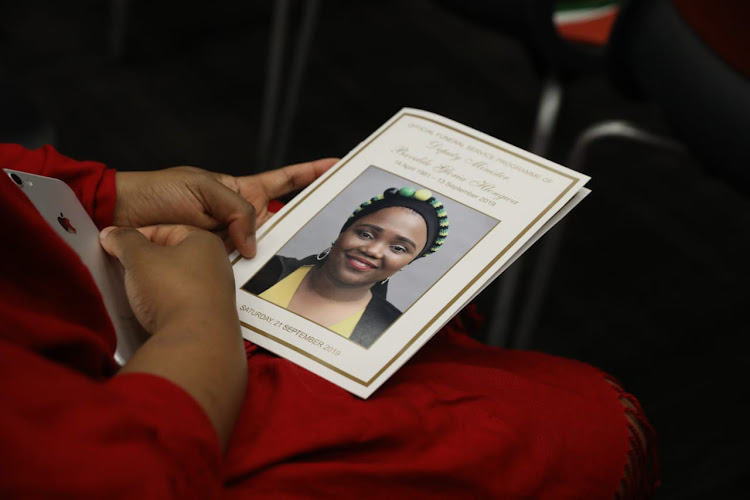 Mourners were arriving at the Inkosi Albert Luthuli International Convention Centre in Durban on Saturday for the funeral service of deputy minister of mineral resources Bavelile Hlongwa who was killed in an accident last week.

According to the official programme, President Cyril Ramaphosa will deliver the eulogy at 10.40am. He is also expected to be in attendance at the cemetery where the national flag will be removed from the coffin by the police and handed to Hlongwa's family. The Last Post and Reveille will then be sounded.

Hlongwa was returning from an ANC Youth League event at the University of Limpopo a week ago when she was hit and killed by a truck on the N1 highway. She had stopped to assist at another accident scene when the crash happened.

Hlongwa was born on April 14 1981 in Umzinto on the KwaZulu-Natal south coast. She obtained her chemical engineering degree from the University of KwaZulu-Natal. At the time of her death, she was studying towards her a master's degree in public administration at the same institution.

She became the central president of the UKZN student representative council in 2009. She served on the ANC Youth League task team from 2013 to 2015. In 2015 she was elected to serve in the national executive committee of the youth league.

She is survived by her mother, four children and five siblings.

Political leaders have expressed their shock and sadness at the death of deputy minister of mineral resources and energy Bavelile Hlongwa who died in ...
News
2 years ago