The three people who are alleged to have kidnapped six-year-old Amy’Leigh de Jager outside her primary school earlier this month are a danger to women and children - and  should not be released on bail.

This was the testimony of Const Clayton Motloung in the Vanderbijlpark magistrate's court on Friday morning.

Motloung was on the stand for a second straight day in the bail application of Tharina Human, 27, Laetitia Nel, 40, and Pieter van Zyl, 50. The three are accused of snatching Amy’Leigh from her mother’s arms outside Kollege Laerskool on September 2.

Attorney David May, acting for Human, closed his arguments on Friday morning, saying that Human would not evade her trial or interfere with witnesses and therefore she should be granted bail.

But Motloung disagreed, saying he maintained that there was the likelihood that she would evade her trial and intimidate state witnesses.

Stoffel Venter, for Nel, was next to cross-examine Motloung.

Venter asked if there was more outstanding information on the case, or if the investigation was complete. Motloung responded that police were awaiting outstanding cellphone records, but the state’s case was ready to proceed to trial nonetheless. 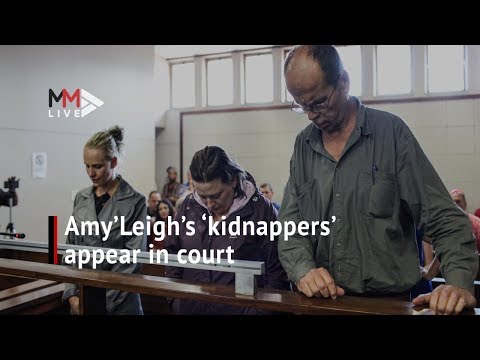 Venter put it to Motloung that Nel owned a plot which she bought from her parents four years ago. He used this to argue that his client was not a flight risk, would not evade trial and would not interfere with witnesses.

Motloung said he was unaware of the property ownership.

“At this point the accused is a danger to women and children. It is possible that she might do it again,” he told the court.

Venter asked Motloung how Nel would intimate a state witness, who is also a friend of hers.

“Before this crime was committed, these were people who spent most of their time together. It is possible that she might influence her to not even come to this court and testify,” he responded.

Motloung maintained that the state has a strong case against the three accused and would strongly oppose bail.

Legal Aid attorney Lungelo Chirwa, for Van Zyl, argued that Motloung was lying to the court about his recent visit to the family of his client.

Chirwa said he spoke to Van Zyl’s daughter on Thursday and she informed him that Motloung paid them a visit to obtain further information and also asked her if she was willing to testify against her father.

Motloung strongly denied the allegation. He, however, said that Van Zyl’s wife was a possible witness.

The court heard that Van Zyl had also sold his plot because he was not working and could not afford the bond. According to Motloung, Van Zyl informed him that he got less than R6,000 profit when the plot was sold.

Chirwa put it to Motloung that he was pre-empting that the accused would be found guilty.

“I still believe in innocent until proven guilty, but I believe we have a strong case,” Motloung responded.

Magistrate Hussain Khota asked Motloung if there were still suspects on the run in the case and whether there would be an arrest soon.

Motloung said there was still one suspect at large. The man lived on Van Zyl's plot.

The man was apparently unaware of the kidnapping before September 2.

He only came “on board” to the kidnapping plan on Sunday night or Monday morning, he said.

“His girlfriend is still at the plot. His name is known to the state and intelligence.”

Khota asked Motloung if the accused before court were related.

He said he thought that only Nel and Van Zyl were related.

According to Motloung, Amy’Leigh told police that she was kept at Van Zyl's plot of land. She described in detail where she was held.