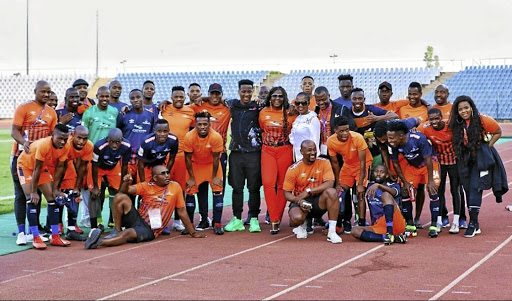 Imagine going to bed as a Real Madrid supporter and waking up as a Real Sociedad fan.

This is exactly what has recently happened in local football. The followers of GladAfrica Championship outfit Royal Eagles were caught by surprise in the past days when the club's Instagram page changed to Real Kings!

After S'bu allegedly took over Royal Eagles, which they once co-owned as a couple, sources have now confirmed that Shauwn is now the owner of Real Kings after buying the outfit that was already operating in the second-tier .

Real Kings boasted just over a thousand followers on Instagram and suddenly they have close to 28,000, appropriating followers of Royal Eagles without compensation.

Royal Eagles' page was changed to reflect a new name, Real Kings, leaving its followers confused as to which team they were really following. Those who dared to ask were quickly assured that all will be explained in good time.

Their son Andile, who's seemingly in his mother's corner, ranted in a recent social media post that his father was wrestling Royal Eagles away even though it was his mother's brainchild.

"She dove in head first and wholeheartedly into the world of football. Walked the corridors of football with confidence because to her, it wasn't just another accessory to show off, she respected the processes that goes into running a club.

Especially with her aim to build a legacy for me when I came of age," ranted Andile, 18, in the post.

PSL, Safa yet to receive complaint
Sport
3 years ago

Our sources confirmed that Shauwn has been trying for weeks behind the scenes to secure another club and eventually succeeded.

"She tried with Uthongathi and that didn't work out, and also negotiated with [new GladAfrica side] Steenberg United, but they couldn't agree on terms," revealed our source.

"But now you saw her in Real Kings colours when they beat Moroka Swallows 1-0 [at the weekend]. It's her new club."

As if things couldn't get even more interesting, Royal Eagles will host Real Kings in a league clash at Chatsworth Stadium on Saturday at 3pm.

This would be like the same team playing an 11 v 11 at training, because Shauwn has moved to Kings with some players from Royal Eagles, as well as coach Joel Masutha.

A new curator has been appointed to take control of the substantial assets of Sbu and Shauwn Mpisane.
News
3 years ago

The curator appointed late last month to take control of the assets of Sbu and Shauwn Mpisane, which are under attachment by Sars, was forced by ...
News
3 years ago

Royal Eagles co-owner Shauwn Mpisane has reiterated they have no intention of buying a top flight status.
Sport
4 years ago
Next Article