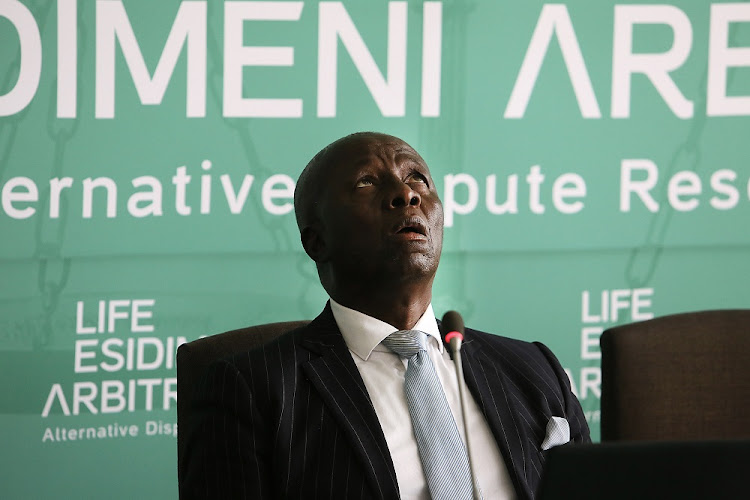 Retired deputy chief justice Dikgang Moseneke, who headed the arbitration hearings between the state and the families of victims in the Life Esidimeni tragedy.
Image: ALON SKUY/THE TIMES

The National Prosecuting Authority (NPA) said on Tuesday that there was insufficient evidence to bring charges in 144 cases it investigated over the Life Esidimeni tragedy.

As such, an inquest into the deaths of the patients will be heard by a Pretoria high court judge.

"After careful consideration of all the facts, reports and available information, acting director of public prosecutions, advocate George Baloyi, decided that a formal and joint inquest into all deaths related to the Esidimeni tragedy be held in the high court of Pretoria before a judge," said NPA spokesperson Phindi Mjonondwane.

She said an arbitration inquiry into the Life Esidimeni tragedy was established following recommendations in a report by the health ombudsman. The report detailed findings into a probe to establish the circumstances surrounding the deaths of mentally ill patients.

At least 144 psychiatric patients died after 1,711 mentally ill people were moved from Life Esidimeni homes into ill-equipped and underfunded NGOs in 2016 in Gauteng.

An inquiry, led by retired deputy chief justice Dikgang Moseneke, concluded its work in March 2018 and found that government officials acted in breach of the law and the constitution when they ended the Life Esidimeni contract and moved patients to NGOs without due regard for their well-being and state of health, said Mjonondwane.

"During April 2017,the NPA received 144 inquiry dockets regarding the Life Esidimeni tragedy and [Baloyi] then assigned a team of four experienced advocates to the matter to work closely with the investigators in collecting more information to build a solid case.

"Led by a very senior advocate, they devoted most of their attention to a very protracted investigation, converting all 144 inquiry dockets into one docket, guiding investigations and monitoring progress on further documentation/statements that had to be obtained," said Mjonondwane.

"It is this process that has revealed that the evidence at our disposal currently is not enough to prove causation of death, nor is it enough to help us link the actions of different role players to the eventual deaths.

"It is against these findings and facts of the case as a whole that the state had to make a determination whether a prima facie case justifying prosecution could be made," she added.

The Gauteng government wants to recoup more than R1.8m that was overpaid to NGOs implicated in the Life Esidimeni tragedy.
News
3 years ago

Former MEC to cough up R1.5m.
News
3 years ago
Next Article