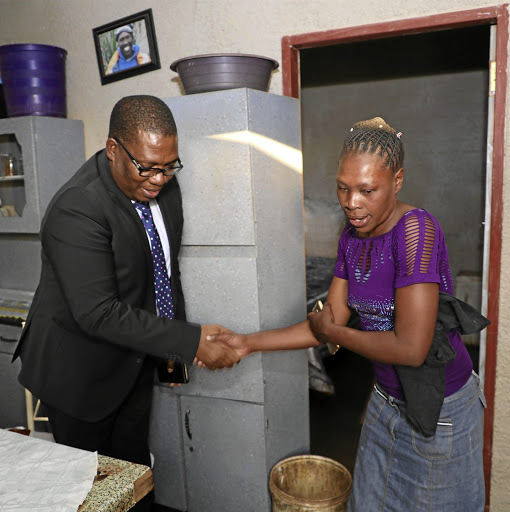 South Africans opened their hearts and pockets to the family of slain Springs car guard Vusi Mgiqwa, donating more than R50,000 to counter an offer made by his alleged killer.

The pledges came after Gauteng education MEC Panyaza Lesufi vowed to give the family the R50,000 offered by Mgiqwa's alleged killer in an agreement that would be turned into a plea bargain in his case.

NPA spokesperson Phindi Mjonondwane said those opposed to the settlement placed by Lukas van der Merwe can write to the director of public prosecutions to raise their objections.

Some of the MEC's followers promised to double his initial offer of R50,000 to R100,000. By late yesterday, Mgiqwa's sister Jabulile said she continued to received payments of between R200 and R250 into her bank account. Jabulile said she received at least 30 calls from people expressing willingness to help.

When Lesufi walked into the family's yard in Tsakane, Ekurhuleni, yesterday, she ran back into the house and wept.

By the time Lesufi was inside, Jabulile stood still and covered her face with a cloth and kept on crying.

These were tears of joy as Lesufi had mobilised people on Twitter to counter the R50,000 offer made by Van der Merwe.

Lesufi gave them Jabulile's contacts and urged them to speak to her directly. By the time Lesufi arrived at Jabulile's home, R50,000 had been deposited into her bank account.

Lesufi spoke to her while she sat quietly on a yellow bucket which is used as a chair in the house. A pillow was placed on a broken wooden chair for Lesufi to sit on.

The interaction between the two lasted for under five minutes and then Lesufi left. "I'm alright now. I can see that there are people who really want to help me," she said.

Lesufi said he was offended by the compensation that Van der Merwe offered the family for their loss.

"I never thought in life I would come across a situation where a life of a human being is worth a price like this. That's what made my heart to sink," Lesufi said.

He said he would continue to urge people to make contributions directly to the family.

Mgiqwa died in hospital last year from head injuries he suffered after Van der Merwe allegedly punched him during an altercation over parking outside a restaurant in Selcourt, Springs.

Mgiqwa fell on his head and was left unconscious. He was the breadwinner for his family.

His family had struggled to raise money to bury him until a crowd-funding initiative was set up to help the family.

The Mgiqwas sat inside the yard of an RDP house quietly as they listened to words of comfort from different mourners paying homage to their beloved son.

The family of murdered car guard Vusi Mgiqwa is willing to accept R50,000 compensation from his alleged killer.
News
2 years ago
Next Article