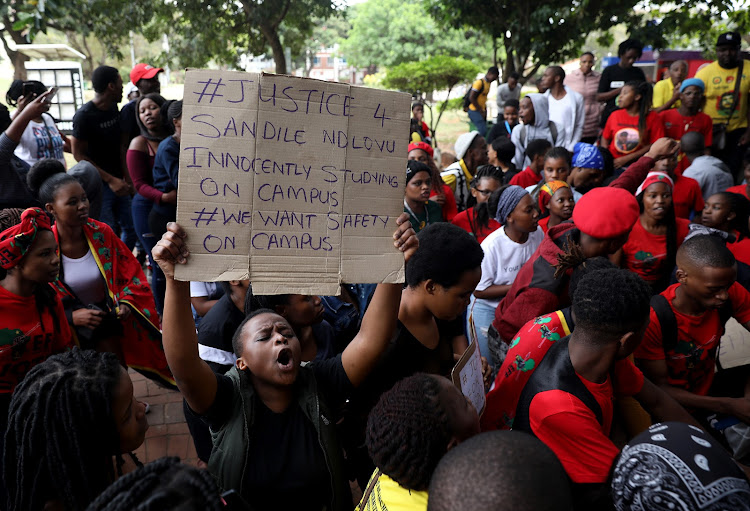 Lucy Zucula holds up a placard calling for justice for Sandile Ndlovu who was stabbed in a lecture room on Monday
Image: Sandile Ndlovu

Students at the Durban University of Technology shut down the institution on Friday and marched to a Durban hospital following the stabbing of a student in a lecture room on Monday.

First-year industrial engineering student Sandile Ndlovu is fighting for his life after he was brutally assaulted in a lecture room at the university’s Steve Biko campus. Ndlovu's uncle, Tshepo Mokoena, told TimesLIVE on Friday that although Ndlovu was still in a critical condition, they were hopeful.

Lectures were suspended after students protested and marched to City Hospital, where Ndlovu is in the ICU, to hold a prayer meeting outside.

"As students, we are fighting for safety and justice for Sandile because we feel unsafe at res and on campus with all the things that are happening; students are being stabbed,” said Lucy Zucula.

"The VC (vice chancellor) has security that protects him but what about us as students. Sandile left Mpumalanga to study; he didn't know he would end up getting hurt. It seems like we made a mistake by coming to DUT. This is not the first time - first it was Mlungisi who was shot and killed by security guards, now Mlungisi," added Snenhlanhla Ngubane.

Zucula and Ngubane live with Ndlovu at an off-campus residence and said they felt like the university was not doing anything following the incident.

Lucy Zucula says she feels the University is not doing anything after her res mate #SandileNdlovu was stabbed inside a DUT lecture room on Monday. #JusticeForSandile @TimesLIVE @yasantha pic.twitter.com/eEWBflh8vX

In a communique to staff and students announcing the suspension of lectures, DUT said: "The university apologises for the short notice but this follows the student protest action that started in Durban this morning. This decision was taken in the best interests of the safety and security of all students and staff."

Leaders of the EFF and Sasco at DUT addressed students at Steve Biko campus following a march to City hospital where #SandileNdlovu is fighting for his life after he was stabbed in a lecture room #JusticeForSandile @TimesLIVE @yasantha pic.twitter.com/L3WtcMHOlX

Meanwhile, the SRC has once again handed a memorandum to the university calling for the removal of current security company Xcellent Security.

"A tender process was initiated a few months ago to procure the services of a new service provider to replace the outgoing provider, Xcellent Security. The process to appoint a new security provider will be concluded by the end of October," said the university in response to the SRC’s memorandum.

The university also said that the council had allocated R30m to improve security.

An 18-year-old first-year industrial engineering student from the Durban University of Technology's (DUT) Steve Biko campus is fighting for his life ...
News
2 years ago
Next Article