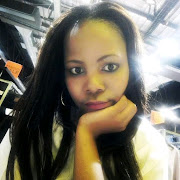 Image: Supplied Sibongile Zenzile, 29, who was allegedly murdered by her boyfriend.

Courtroom A in the Kempton Park magistrate's court was packed to capacity on Thursday as men and women gathered to demand justice for slain Sibongile Zenzile, who was allegedly murdered by her boyfriend.

Zenzile was found beheaded at her Kempton Park flat on April 26 this year.

Kebe, wearing a black bomber jacket, appeared briefly at the court on Thursday. During his appearance he maintained a straight posture with his hands around his waist.

Shortly after the gruesome discovery, 31-year old Kebe was arrested at a shop that he operated with Zenzile.

Days after she was found, neighbours and flatmates used her Facebook account to locate her family, who are based in the Eastern Cape.

Image: Nonkululeko Njilo Resident and members of the ANCWL protest outside the Kempton Park magistrate's court on Thursday.

Community members and members of the ANC Women's League (ANCWL) protested outside the court.

Deputy secretary of the ANCWL in the area Liliwe Mlilwana said the demonstration was  to call for the harshest possible sentence.

"We want justice [and] to put an end to the scourge of gender-based violence crimes. We will follow this and other related cases till justice is served. We cannot keep quiet as if women are just objects," she told Sowetan's sister publication TimesLIVE.

Mlilwana expressed concern at the postponements of the case.

"On Tuesday the case was postponed because of an interpreter... We're saying we will monitor this case throughout to ensure justice is served. No women deserves to die in such a manner, "she added.

Meanwhile, a resident in the area, Pfukani Mhlongo, expressed concern at how women now lived in fear.

"It's bad we are always watching our back and not feeling free in our own country.... We hope justice will be served," she said.

Kebe's murder case was postponed to October 2 to allow for DNA results, further investigations and a decision from the director of public prosecutions.