'SABC had catched big fish in me' - Hlaudi 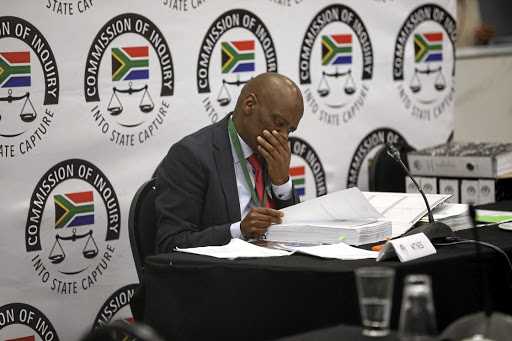 Former SABC boss Hlaudi Motsoeneng did not have to apply for his job because the public broadcaster had "catched the fish" (sic) they wanted when they head-hunted him.

These were some of the astonishing revelations by the former SABC strongman which left some of those in the audience at the commission of inquiry into state capture, including deputy chief justice Raymond Zondo, in stitches.

Motsoeneng, who took the stand yesterday, told the commission that he had been head-hunted when he joined the public broadcaster in 1995.

"I did not even apply. I was head-hunted. They catched (sic) the fish that they were looking for," he said yesterday.

The Motsoeneng show included confessions about enjoying the curry at the Gupta family's Saxonwold, Joburg, compound in his attempt to "capture the private sector" and being an intellectual whose lectures were turned into "part of the syllabus" at Wits Business School.

Former SABC executive Hlaudi Motsoeneng has admitted that he had visited the Gupta family's Saxonwold home so often that he cannot recount every ...
News
2 years ago

On hauling then newly appointed SABC group CEO Lulama Mokhobo to the controversial Gupta family's homestead, he said his relationship with the Guptas was an attempt to "capture" the family which he said had resources including a jet and "all these nice stuff".

"The concern, chairperson, is hayi nna I don't know, when you talk about the Guptas these days, people don't want to hear anything.

"They run away, they want to go under the tables. I don't know what is the problem but reality is, we have met the Guptas, we have engaged them chairperson, and I want to allude to this chairperson," said Motsoeneng.

To which Zondo responded with a laugh: "And you ate the curry?"

Motsoeneng responded: "I enjoy [curry] chairperson. Yes. And I want to allude to this chairperson, you are dealing with state capture, in my view nna I was capturing private sector."

Motsoeneng said that even though he did not have a matric certificate - which formed a big part of his testimony - he is an intellectual who has addressed a lot of universities, including the Wits Business School, which he claimed has adapted his address into the official curriculum.

"I want to thank the SABC because even if you check my profile, they took me to universities, I lecture at the universities. I wonder how many people who are saying I'm uneducated [have done that].

"Even at Wits Business School I lecture and my lectures about leadership, they have turned them as part of their syllabus. Who said I'm uneducated, chairperson?

"It is an insult because we must view education differently because to have paper chairperson you are not educated, a paper opens doors ... but also you need yourself, to empower yourself," he said.

"Hlaudi Motsoeneng was invited to take part in a breakfast panel discussion at WBS on 6 Dec 2013. A guest speaker does not make an academic.

"At no stage has Mr Motsoeneng lectured at WBS, nor has any material authored by him formed part of the curriculum of any of our programmes."

Motsoeneng also claimed he was the best ever at the SABC.

"On the light note chairperson, when you were asking some questions to others, you said to them, 'but if you did advertise this post and allow others to participate, you don't think maybe. you'll get another person who's better than Hlaudi?' I can tell you, in the SABC, no one was better than me. Even if they advertise it," he said.

"When people have talent, you can't go wrong because they are the ones who bring [the] audience. it's a broadcaster chairperson, people who are acting as actors, your soapies and dramas, some of them they don't have even matrics but I think even the judges they watch these people [and] they are so excited."

Motsoeneng will be back on the stand today.

Former SABC executive Hlaudi Motsoeneng says he feels insulted when claims are made that he lied about his qualifications.
News
2 years ago

We knew Motsoeneng didn't have matric, but he had the skills: former SABC chair Ben Ngubane

Hlaudi Motsoeneng was a "troubleshooter" who had the skills the SABC needed for his chief operations officer - even though he did not have the ...
News
2 years ago
Next Article