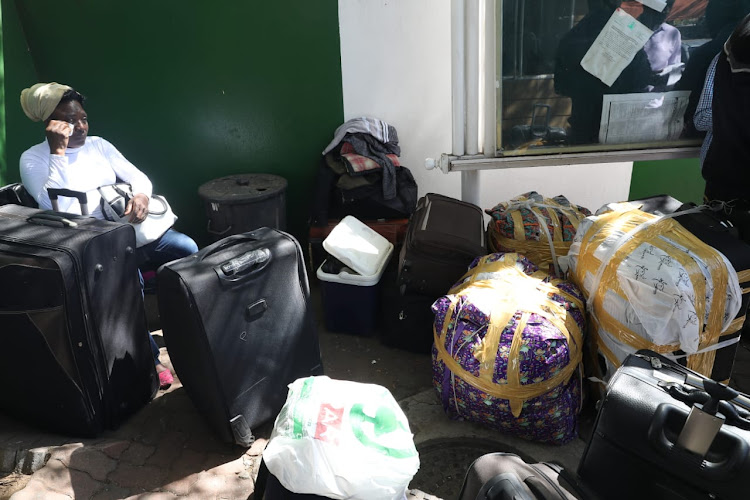 A Nigerian womanwaits outside the Nigerian embassy in Rivonia hoping to get free transport to take her home
Image: Thulani Mbele/Sowetan

"Even if things can return to normal, I can never come back to South Africa."

These were the words of Nigerian national Stone Amuchie at his country's consulate in Ilovo, Johannesburg', on Wednesday.

Amuchie was among hundreds of Nigerians who visited the consulate to seek help as they planned to leave the country due to xenophobic attacks in Gauteng.

"The majority of the people we met in this country want to go. They are killing people and destroying shops. We thought it was a joke but to our surprise we witnessed it," said Amuchie.

Amuchie came to South Africa in 2011 and was a cosmetics trader in Tembisa. On September 2, a mob of people attacked his business and looted; he ran for his life.

"The situation is worse than anything I have seen in this country. I just want to go," Amuchie added.

Since September 1, xenophobic attacks erupted in eastern suburbs of Johannesburg and spread to other parts of Gauteng. A total of 12 people have been killed in the violence and over 600 arrested.

The attacks on businesses owned by foreign nationals has resulted in a diplomatic fallout for South Africa with a number of countries on the continent. Government and civil society have condemned the attacks and called for the citizens to vent out their concerns through dialogue.

The home affairs department has failed dismally to ensure that all migrants entering or leaving the country are properly accounted for.
Opinion
2 years ago

Katlehong experienced severe xenophobic violence from September 5 2019, the day on which two burnt bodies were found in the township.
News
2 years ago
Next Article