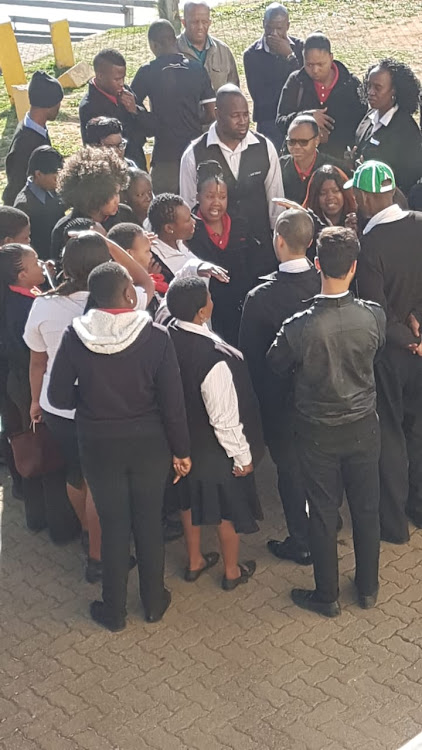 Protesting employees outside Shoprite supermarket in Southgate shut down the store for hours on Monday after employees were allegedly called 'lazy k***rs'.
Image: Provided

Employees at a Shoprite supermarket in Southgate, Johannesburg south, want justice after allegedly being called "lazy k***s" by a regional manager.

One of the employees, Thulani Tyala, said: "It's sad that in 2019, there are people who don't understand the impact this word has on us."

"Our forefathers suffered the same fate but we are saying there is no room for racism and enough is enough," he said.

Tyala said he'd been employed by Shoprite for more than five years and had seen many occasions when the same manager bullied, threatened and, on one occasion, slapped an employee.

"I know a lot of people who resigned because of her, some tried reporting the cases but didn't get anywhere," he said.

The latest incident occurred in Saturday.

"We had been doing stocktaking at the back. Someone cracked a joke and we all laughed. Then she came in and asked why were laughing. Before anyone could answer, she starred shouting 'You lazy k***s are not doing your jobs' and left," he recalled.

A case of crimen injuria was opened with the Mondeor police station by Tyala.

Another employee, Vusumzi Jaxa, who works as a merchandiser, said: "We  were so angry, we thought we didn't hear her properly, but when we consulted the branch manager who also heard her, she apologised on her behalf."

"I understand the branch manager apologised on her behalf but she must account and it's unfair for them to expect that things go back to normal just like that," said Jaxa.

Agitated employees embarked on a protest to demand the matter be probed, with the store being closed for several hours on Monday.

In a statement, the company said a complaint had been lodged with the head office.

AfriForum deputy CEO Ernst Roets' display of the old flag after the Equality Court had declared this to be hate speech showed he was in contempt of ...
News
1 year ago

"The Shoprite Group strongly disapproves of racism in the workplace and will not allow any member of management or staff to behave inappropriately. An investigation into the incident at Shoprite Southgate and related complaints started immediately this morning and a disciplinary process is being followed."

The group confirmed the store had been affected by the protest on Monday, saying trading only began after 10am following police, management and union intervention.

It is unclear if the regional manager will be suspended during the inquiry, but the group has vowed to take action.

"Appropriate action will be taken in accordance with the law and the company's code of conduct, which seeks to promote the principles of courtesy, respect and equality for all employees, including merchandisers and contracted workers and which applies to all management and staff," said Shoprite.