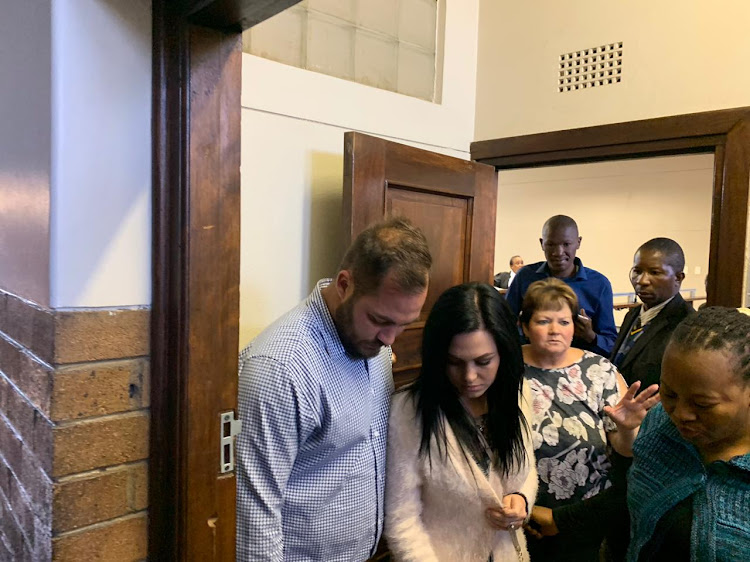 The parents of six-year-old Amy’Leigh de Jager, who was "kidnapped" outside a primary school in Vanderbijlpark last week, have arrived at Gauteng's Vanderbijlpark magistrate’s court.

Wynand and Angeline de Jager appeared calm as they entered the courtroom on Monday morning.

The couple was escorted to an office next to the courtroom for privacy.

A large group of family members and friends waited outside court ahead of proceedings. Amy’Leigh’s grandfather, Christo de Jager, was in the gallery.

The father of one of the accused kept to himself..

The community of Vanderbijlpark is shocked at the news that a teacher is among the suspects arrested in connection with the kidnapping of ...
News
2 years ago

The three suspects, among them a teacher employed at Amy'Leigh's school, were arrested last week. Four men grabbed the grade R pupil from her mother outside Laerskool Kollegepark on Monday. She was released unharmed in the early hours of Tuesday.

The suspects were arrested on Wednesday night, after what police said was an intelligence-driven operation involving members from the family violence, child protection and sexual offences (FCS) unit in Vanderbijlpark, assisted by the FCS unit in Vereeniging and crime intelligence members.

They have been kept in police custody.

The matter is expected to be heard at 11am.

Meanwhile, the Facebook page, Amy-Leigh's Missing Kids, said: “Under the circumstances she is doing OK. She is scared to be alone and not sleeping very good. She avoids talking about what happened by making jokes. She really is a very kind and loving little girl. Thank you for all the loving messages. She appreciates all of them.”

One of three people arrested for the abduction of Vanderbijlpark schoolgirl Amy-Leigh de Jager is a teacher at Laerskool Kollegepark.
News
2 years ago

One of three people arrested for the abduction of Vanderbijlpark schoolgirl Amy-Leigh de Jager is a teacher at Laerskool Kollegepark.
News
2 years ago
Next Article