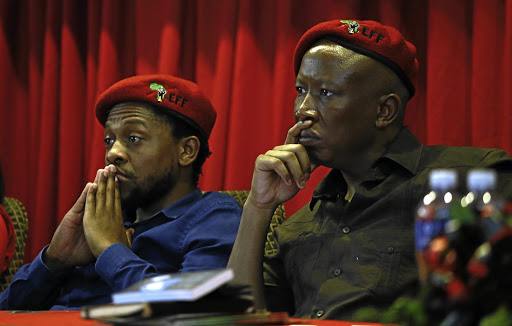 The National Prosecuting Authority has given the go-ahead for EFF leader Julius Malema and spokesman Mbuyiseni Ndlozi to be prosecuted on common assault charges.

NPA spokesperson Phindi Mjonondwane confirmed that a letter circulating on Twitter regarding a decision to take the matter to court was legitimate.

However, she said she could not comment on the contents of the document itself.

"We don't know who leaked the letter," she said.

The letter, which is signed by Deputy Director of Public Prosecutions Advocate Riegal Du Toit, states that Malema and Ndlovi "must be charged and prosecuted" on the common assault charge in the magistrate's court.

SowetanLIVE reported in April 2018 that the party leaders were involved in a scuffle over entry to the Fourways Memorial Park in Johannesburg, where Winnie Madikizela-Mandela was being laid to rest following her funeral at Orlando Stadium in Soweto.

According to the publication, Malema, Ndlozi and Floyd Shivambu were denied entry to the grounds - and Malema allegedly told a soldier who tried to stop him that "no white man can stop me". The three were eventually allowed to enter and take their seats.

A case was opened at the Douglasdale Police Station in Johannesburg.

Malema has denied any wrongdoing.