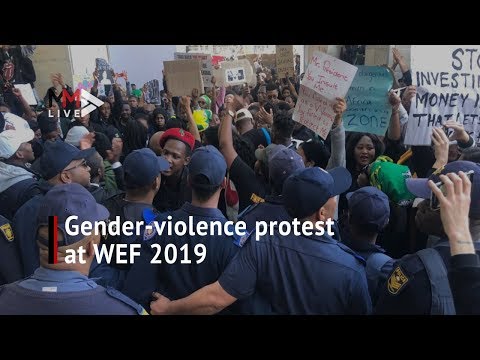 Police used tear gas against protesters trying to get past them into the World Economic Forum on Africa in Cape Town on Wednesday.

The crowd was demanding to hear from President Cyril Ramaphosa about the government's response to gender-based violence.

Several thousand students who demonstrated outside parliament following the rape and murder of University of Cape Town first-year Uyinene Mrwetyana made their way to the Cape Town International Convention Centre, where the four-day WEF gathering began on Wednesday.

Police inside the convention centre instructed delegates not to go near the windows.

Pepper spray used. Things are getting tense as protesters are demanding to see the president @GroundUp_News #aminextprotest pic.twitter.com/4TFPrG7gV7

Protesters break through the police barrier at #WEFAfrica19 and make a run for the entrance. Hundreds of people are arriving now. Largely peaceful. @TimesLIVE pic.twitter.com/gSugBr1V2p

Protesters broke through a police cordon at the Heerengracht traffic circle and ran to the convention centre, where dozens of African leaders are among the delegates attending a four-day meeting.

Bedlam broke out as the crowd arrived at the CTICC’s main door. Scuffles broke out with police trying to prevent them entering and drive them back.

Protesters from parliament have migrated to the CTICC where the #WEFAfrica19 is being held. They would like an audience with a certain president Ramaphosa... #DearMrPresident #StopKillingOurWomen #UyineneMrwetyana pic.twitter.com/NGvULH9Szr

Heerengracht filled with protesters under the sky bridge linking the convention centre’s two buildings, disrupting traffic in the CBD.

The crowd chanted “We want Cyril” and “We want justice”.

The protesters were attempting to hit Ramaphosa where it hurt most, as he attempts to enhance SA’s international image as an investment destination.

With widescale looting and xenophobic violence taking place in Gauteng and a series of attacks on women and children countrywide, social media is bristling with posts declaring the president "missing".

Protesters outside the World Economic Forum in Cape Town demand for the country to be shut down and a state of emergency to be declared in the wake of a week of violence against women. @TimesLIVE pic.twitter.com/NmbKHUKCtz

When Olive Shisana, from the president's interim committee on gender-based violence and femicide tried to address the crowd, she was booed.

Protesters with duct tape over their mouths and dressed in black demanded to know what tangible steps the government was taking to address the crisis.

Shisana said the interim committee had nearly completed its public consultations and was taking a "scientific approach to find out how to address the problem".

The protesters were unswayed, demanding to know what the budget was for government's strategy and when the first steps would be taken.

Shisana told TimesLIVE the criminal justice system was not addressing the problem and there was a societal problem with the way young boys were raised.

"Boys are being raised to think they are more valuable that girls," she said.

Shisana said the interim committee still had to visit two provinces as part of its information gathering after which a "scientifically based" strategy would be devised and implemented.

"Today our team is still going around around the country to consult women on how to address gender-based violence.

"We can't develop it in the presidency without involving women around the country. I felt I should take a risk and talk to them because I empathise with them," she said.