The army will not be sent to Joburg despite ongoing violence: Cele 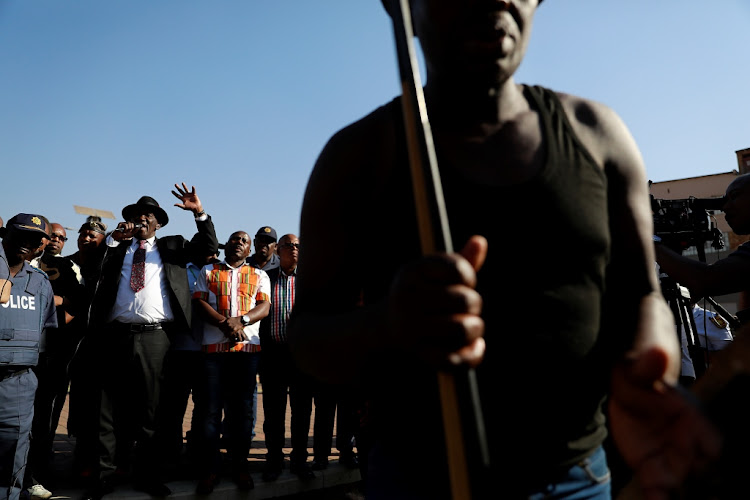 Police minister Bheki Cele addresses residents in Jeppestown, Johannesburg, on Tuesday in the wake of five deaths and close to 170 arrests in ongoing violence across Gauteng.
Image: ALON SKUY

There is no need for the army to be called in to quell violence and end looting in Gauteng.

This is according to police minister Bheki Cele, who said on Tuesday that police force were more than capable of dealing the violence, which has left five people dead since Sunday.

A ministry statement on Tuesday night said Cele was "confident police are capable of restoring law and order back into areas affected by violent looting and vandalism in Johannesburg central". It came after the minister met with izinduna representing communities residing in hostels in Johannesburg.

According to police investigations, the statement said, many suspects arrested for criminal acts "reside in Johannesburg central hostels".

While Cele was in the meeting, Gauteng premier David Makhura was forced to make a hasty retreat to dampen outrage as two South Africans were shot and killed about 1km from each other in Coronationville, Johannesburg.

Police minister Bheki Cele has started his meeting with community leaders and business owners at Jeppe police station in downtown ...
News
2 years ago

Still, said Cele, police were making headway in healing with the ongoing unrest.

Cele said: “Anyone who thinks we as the SAPS don’t have intelligence on the ground, better think again. There are several instances that criminal acts were stopped before they started and officers were acting on information from crime intelligence.”

He added that the "deployment of additional forces, such as the South African National Defence Force, is not on the cards".

“I really don't believe that it’s only foreign owned shops and are being targeted. It’s clear it’s pure criminal elements that are taking advantage of a volatile situation. As the South African Police Service our job is clear: we are on the ground to deal with lawlessness and all its manifestations,” Cele said.

"We won't hesitate to call for the army" - Premier David Makhura

Gauteng Premier David Makhura has promised to call for the deployment of the South African National Defence Force (SANDF)  if the violence in the ...
News
2 years ago

President Cyril Ramaphosa has instructed police minister Bheki Cele to engage with the indunas of the hostels in an effort to quell the violence ...
News
2 years ago
Next Article