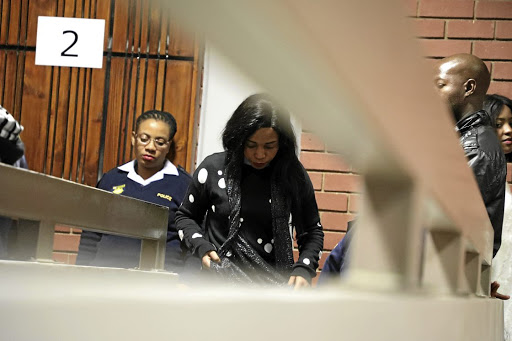 Fraud accused Malibyane Maoeng may face charges of murder at a later stage as police are investigating deaths of three men linked to her. / THULANI MBELE

Forensic downloads have revealed that the phone belonging to slain Ekurhuleni doctor, Sankubele Dire, was used in Daveyton for more than three days after he was found dead.

This was revealed during the trial of Malibyane Maoeng, 30, who is charged with possession of Dire's stolen vehicle, theft and fraud.

Dire was found dead on June 30 last year at a lodge in Sasolburg, Free State.

Yesterday, Sphiwe Majozi, a data analyst from Cell C, told the Benoni regional court that his investigation confirmed Dire's cellphone was last used in Daveyton where Maoeng rented a room.

"The analysis indicated that the number was used at Daveyton train station, Madingoane Primary School and Benoni, from 30 June to July 2 last year" said Majozi.

Daveyton station and Madingoane school are sites near Phuthi Street where Maoeng rented a room.

Majozi also told the court the phone was used to make outgoing calls only and messages to multiple phone numbers.

"The number was also used to check balances [of the phone's airtime]," he added.

Maoeng, dubbed the "black widow", was the last person to be seen with the medic before his body was discovered by the lodge workers with froth coming out of his mouth.

Previously, a witness told the court how her friend, Maoeng, arrived home with the Dire's Mercedes-Benz, claiming it was a gift from her stepfather.

Ntokozo Hlatshwayo, who rented a room with Maoeng in Daveyton at the time, said she was shocked to learn about Dire's death. She said she witnessed Maoeng use Dire's credit card to buy furniture for a new apartment, two days after arriving with the flashy car.

Hlatshwayo also told the court that Maoeng left the Free State lodge with Dire's white Mercedes-Benz, and she told her everything.

State procecutor Basil Marishane asked for the trial to be postponed to October 14 for finalisation.

Maoeng is also linked to two inquest cases that are being investigated by police in connection with the deaths of two other men alleged to be her lovers.

Like Dire, both men were also found dead with froth in their mouths in what was suspected to have been cases of poisoning.

The women who was last seen with the doctor found dead in a lodge is expected to appear in the Benoni magistrate's court on Thursday.
News
3 years ago
Next Article